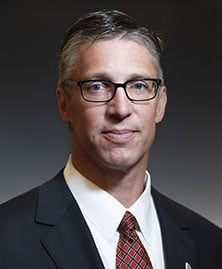 Vice President Brent Leonard was born in 1973. After attending college he started railroading in 1997 on Union Pacific as a conductor/switchman. He was promoted to engineer in 1998.

As vice president and general chairperson, Leonard has been assigned to the Federal Rail Safety Advisory Committee (RSAC) and the 2017 National Wage & Rules Coordinated Bargaining Team.

Leonard and his wife live in Topeka, Kan., and have two daughters.