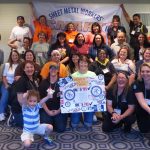 On May 1 of this year—May Day, when labor unions in most parts of the world celebrate May Day—more than a thousand construction tradeswomen joined in Los Angeles for a union-sponsored conference to support working women.

The event enables those who work in traditionally male environments to share best practices in everything from surviving and thriving in apprenticeship to dealing with a hostile workforce to balancing life and work in the trades. They all made their voices heard.

Among the attendees were 30 women from SMART Sheet Metal local unions from California to New York City. They included Rita Magner from SM Local 104 in San Francisco who was also a 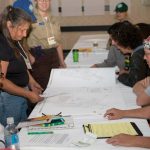 panelist in the Leadership 101 workshop.
“The Women Building the Nation conference is, first and foremost, a leadership conference,” Magner said. “Those who attend return to their locals, get active in their unions and communities to increase the profile of labor unions; and work to elect labor-friendly candidates to improve the lives of ALL workers and their families.”

In other largely male careers, like the military and law enforcement, women are 15 percent of the workforce yet the construction trades have less than 3 percent, a number that has been unchanged for 40 years. 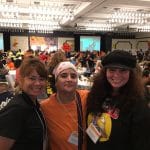 That rate can be higher in a given areas, thanks to groups like Oregon Tradeswomen, Inc., which offers pre-apprenticeship training that exposes women to various trades and prepares them for construction careers.
In that part of Oregon, instructors and apprentices at Sheet Metal Local 16 in Portland, new apprentice classes average about 10 percent women. However, the number who “wash out,“ who finish and can’t find steady work, or who simply decide to seek a different career is shockingly high.

“When I told a woman at the conference I was eight years in, I got a ‘Congratulations’ for getting past the seven-year mark, which apparently is a common point where 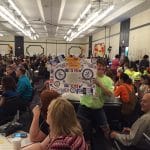 individual women find themselves unable to continue in the trades,” commented Allie Medeiros, a journey-level worker from SM Local 16.

As Medeiros framed it, “I talk often with male mentors and allies about recruiting and sustaining women who are in it for a career, who intend to retire on a union pension. As a contractor, why would you want to put out the extensive time, money, and effort to train someone you believe is temporary? As a woman, why would you want to continue the hard work needed to sustain a career in a field that consistently denigrates you, sometimes to the point of harassment?”
One of the most popular sessions was called, “Workshop for Men—How to be an effective ally.” Every woman knows that while a few men might cause them grief, if it 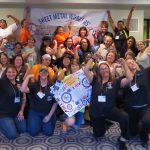 weren’t for the great men who step up to support them, they’d never survive in the trades.

“There needs to be a culture shift that comes from the top,” said Chris Carlough, SMART Education Director and Women Building the Nation Committee member, “We need to lead by example and encourage our leaders to offer support and guidance to the determined and hard working women in our trade. That, along with contractors who are willing to do the same, will help us make a difference in increasing women in our trade.”

It was a breath of fresh air knowing I’m not alone and that there are women like me working successfully in our industry. I want women to know that it’s possible to succeed in construction.

The message that I received from this conference was that—[though] it’s tough at times, it may be lonely out there—I am not alone. Networks of women are willing to mentor and coach. There is nothing like learning from someone else’s mistakes.

I was able to meet 29 other women in the sheet metal industry from across the country. I was able to meet Rita Magner (VP of SM Local 104 out of San Ramon, CA). She was incredibly inspiring and it was great listening to how she’s moved up throughout her career.