‘We must not let the crazies turn back the clock’ 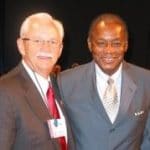 (For more than six decades, Bill Lucy has been a labor-union foot soldier. In 1968, as an officer of AFSCME Local 1733 in Memphis, Tenn., he collaborated with Dr. Martin Luther King Jr. during the sanitation workers’ strike, during which Dr. King was assassinated. In August, Bill Lucy spoke to delegates at the UTU’s quadrennial convention in Hollywood, Fla. Following is a summary of his remarks.)

The UTU, through its Collective Bargaining Defense Fund, has demonstrated a solid commitment to trade union principles and solidarity. President Futhey recognizes there is a daily crisis in the lives of working families as they struggle to put bread on their tables, clothes on their backs and a roof over their heads.

The crazy governors of Ohio and Wisconsin have seen the solidarity of the UTU as it works to preserve collective bargaining rights and quality health care. The UTU may be small compared to some other unions, but it’s right in the middle of the fight – and that’s where you should always be.

The crazy lawmakers who would strip workers of their democratic right to have a union now know you will fight until hell freezes over, and then skate across the ice to continue the fight to protect those rights. You have that reputation, and you can be proud.

A question was raised on CNN whether poor people are responsible for our nation’s economic condition. That’s an incredible question to ask after we bailed out Wall Street, bailed out the banks and bailed out corporations.

The poor can’t pay and the rich won’t pay, and who does that leave? Look across the room at each other and you spot those who are going to bring this nation out of the difficulty it is in. The fact is that it is always the working men and women on whom the weight falls to clean up the mess politicians create.

Working families are victims of the lunacy that has overtaken the political extremists who want to take away our democratic rights to determine our bargaining representatives.

There is currently an unrestrained effort to end workers’ rights to have a voice in the workplace. It is the collective bargaining process that gives us fairness and justice in the workplace, and we will fight for it every step of the way. I reject the notion that if God meant for you to be well off, he would have made you that way.

We as workers must come together to fight back against the forces that seek to turn back the clock to weaken unions and cheapen the cost of labor.