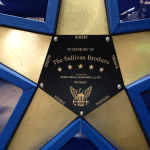 The Sullivan Brothers – George, Francis, Joseph, Madison and Albert, Who Were All in Their 20s, Were Sailors Who Served Together on the U.S.S. Juneau During World War II and Were Killed in Action After the Light Cruiser They Were Serving on Was Sunk by a Japanese Torpedo in the Solomon Islands in November 1942.

The U.S.S. Sullivans – a Now Decommissioned Destroyer Named After the Brothers, is Currently Moored and Open to the Public in the Buffalo Naval Park. 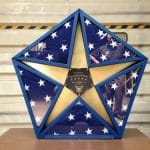 The Retirees From the Buffalo-Headquartered Building Trades Union Gather at the Sheet Metal Workers’ Liberty Avenue Union Hall and Training Center in Buffalo Each Wednesday to Have Coffee, Share Stories and Donate Their Time to Building a Number of Items, Including Individual Flag Boxes That are Presented to Fellow Local 71 Retirees Who’ve Lost a Family Member That Had Served i n the U.S. Military.

But This is Not the First Time Local 71’s Retirees Have Been Involved in Such a High-Profile Project.  A Couple of Years Back, the Retiree Group Built Several Light Sconce Replicas Used in the Restoration of Buffalo’s Historic Central Terminal – Without the Benefit of the Sconce’s Original Plans.  Using Only Photographs of the Originals, the Retirees Work Was Publicly Recognized as They Received the Distinguished 2013 Preservation Award.

The Retirees Had Been Working on a Five-Sided Flag Box – Which Resembles the Bronze Star – When Business Manager Helak Came Up With the Idea to Present the Finished Product to the Buffalo Naval Park to Further Honor the Sullivan Brothers, Who Received a Combined Nine Battle Stars for Their World War II Service.

It Took Local 71 Retirees (Which Also Included Roger Korsch, Who Was Unable to Take Part in the Naval Park Presentation) Three Months – One Day a Week and Overall Around 100 Hours – to Design and Create the Galvanized Metal and Copper Starred Box, Which Was Later Powder-Coated Navy Blue to Reflect That Arm of the U.S. Military. 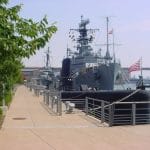 The Star Holds an Individual Glassed Flag Box for Each of the Five Sullivans and in its Middle, the Names of Each Brothers are Etched Upon a Five-Sided Metal Piece in Their Memory.

“This is a Very Active Group of Retirees Who Want to Keep Their Skills ‘Fresh.’  I’ve Never Seen ‘Anything’ Like it.  The End Result Was ‘Remarkable.’  It Was ‘Fantastic,’” Helak Told WNYLaborToday.com Just Prior to Making the Presentation to Naval Commander in Charge of the Park.  “And ‘What Better Way’ Than to Present it to Five Brothers Who Made the ‘Ultimate Sacrifice’ for Our Country.”

“It Feels Great,” Local 71 Retiree Forman Told Your On-Line Labor Newspaper.  “I Often Think About Our Service Men and Woman Who Come Home, Many Who’ve Been Shot Up or are Missing Legs and Arms.  Jeez, I Wanted to Do Something to Honor All of Them.”

Forman, Who Retired From the Union in 1990, is Also a Naval Veteran, Serving on a Submarine Between 1961 and 1967 – Which Prompted Fellow Retiree Perry to Joke: “Yeah, he Served ‘Underseas.’”

The Retirees Laid Out a Design of the Star on a Table and Went From There.  They Started With Sheet Metal, Cut the Metal Into the Appropriate Sizes and Built a Base to Attach the Flag Boxes Before Deciding How the Plaque With the Sullivan Brothers’ Names Would Appear on its Front.

When it Was Finished, the Star Contained Galvanized Metal, Brass and Copper – and Was Powder-Coated Blue to Represent the Color of the U.S. Navy.

“It Was a Pleasure and an Honor,” said Retiree Adam, Who Served in the Army From 1950 to 1958.  Said Retiree Stetzko: “We All Just Really Enjoyed (Building it).”  A Proud Adam Added: “We’re Sheet Metal Workers – We’re ‘Professionals.’  We ‘Design Our Own.’”

The Retirees – Who are Hopeful the Star Will be Adhered Somewhere on the Destroyer So Everyone Who Tours the Vessel Will See it – Were Disappointed There Was No Local Media Coverage of Their Donation at the Naval Park.  Said One Retiree: “I Guess it Wasn’t ‘Newsworthy’ Enough for the Newspaper or the TV Stations.  It Wasn’t ‘News.’”

But Stetzko Also Hopes Those Who See the Star – Which Also Has Inscribed That the Piece Was Presented by Sheet Metal Workers Local 71 Retirees – Also Works to Positively“Change the Perception” of Unions and The Workers They Represent.