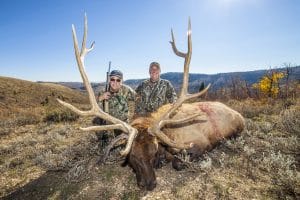 The Union Sportsmen’s Alliance kicks off the 6th season of its award-winning TV series, Brotherhood Outdoors, with an elk hunt that is as challenging as it is inspiring. The show, winner of “Best Combination Show” in the 2011 Sportsman Choice Awards and a contestant for “Best Educational/Instructional” show in 2013, launches its exciting new season on Jan. 5 at 11 a.m. ET on the Sportsman Channel.

Brotherhood Outdoors co-hosts Daniel Lee Martin and Julie McQueen, who double as the show’s skilled trip guides, invite viewers to come along and experience the behind-the-scenes excitement of outdoor gaming. Heart pounding scenes of hunters in anticipated pursuit of their quarry and the thrill of anglers fighting to pull in fish are woven into heartfelt stories of American’s hard-working sportsmen and women and their commitment to conservation and a hard day’s work.

The new season begins with a memory-filled elk hunt featuring union machinist Gene Barnes who sets his sights on helping his 74-year-old father, Harlyn Barnes, harvest a bull elk in memory of his late son and the cherished hunting trips the three of them shared together. Follow the group as they confront Idaho’s steep terrain and high altitude, hiking to 7,500 feet in elevation to a lookout point to glass for elk.

As the series continues, viewers will join an operating engineer on his quest for Boca Grande tarpon, chase coons through moonlit woods with a laborer, head to California with a machinist for some quick action wingshooting and his first hog, outwit or outwait a 150+ Kansas buck with a roofer and much more!

Brotherhood Outdoors awards union sportsmen and women who are committed to preserving North America’s outdoor heritage with a guided trip or the opportunity to show off their guiding skills and local hunting or fishing destinations on national TV.