But despite that performance at their July 13 confirmation hearing, the GOP-majority panel and the GOP-run Senate will likely approve veteran management-side labor law attorney William Emanuel of Los Angeles and Marvin Kaplan, a former top GOP congressional staffer on labor issues, by party-line votes. The committee will vote on them on July 19.

Trump nominated the two to fill vacant seats on 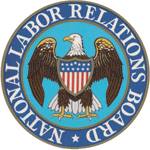 the 5-person board, which oversees and judges labor-management cases in most of the private sector and some public sector firms and enterprises. Their confirmation would give the board a 3-2 GOP majority, a prospect that the radical right and their business allies anticipate with glee – and that workers do not.

AFL-CIO President Richard Trumka said the “track records” of Kaplan and Emanuel “raise serious concerns about their commitment to the rights and protections guaranteed by our labor laws and enforced by the NLRB.

“Kaplan has never practiced labor law, and his experience comes from crafting legislation for politicians to rig the rules against working people. Emanuel has a long record of practicing labor law on behalf of employers, most recently at one of the most infamous union-busting law firms in the country. On their face, the résumés of both appear to be in direct conflict with the mission of the NLRB.

“A fair and functioning NLRB can protect the freedom of working people to negotiate a fair return on our work so we can provide for our families. A partisan, ideologically driven NLRB can further empower corporations and CEOs to take away our freedoms at work,” he warned.

Democratic senators also were leery of the two. “There are a lot of folks who think that when you two are put on the board, the fix is in,” Sen. Christopher Murphy, D-Conn., told them.

“I haven’t found one instance where you supported the NLRB” or workers in arguing cases, in academic writing or in bargaining, top committee Democrat Patty Murray, D-Wash., told Emanuel. “In labor law, you just don’t do both” labor and management work, he replied.

Emanuel and Kaplan gave frequent answers of “I would make decisions case by case,” or “I would consult with fellow board members” or “it depends on the facts,” or all of the above to pointed questions from committee Democrats. Both pledged to enforce U.S. labor law, but went no further than that – and sometimes even backtracked.

A skeptical Murray said both men flunk. “As I look at your records, I see anti-union, anti-worker and even anti-NLRB stands,” she told them. “Do you believe the National Labor Relations Act is meant to encourage collective bargaining?” she later asked Emanuel.

That didn’t satisfy Sen. Elizabeth Warren, D-Mass. She called his big firm, Littler Mendelson of Los Angeles, “a noted union-buster.” She added that “Your entire career has been to discourage union membership. How can people trust you?” Emanuel replied he “practices traditional labor law” there.

Emanuel did pledge to Warren, however, that he would not vote on cases involving his firm – though not on other cases involving issues, such as legalizing so-called micro-unions, where he’s opposed the board academically. “You’ve prejudged those areas,” Warren replied.

Emanuel also denied the existence of one labor law issue highly visible in his hometown. Sen. Maggie Hassan, D-N.H., asked him “What would you do” on the NLRB “to cure this epidemic?” of employer misclassification of workers as independent contractors.

Independent contractors, unlike “employees” under labor law, lack worker rights – including the right to organize — and their employers can get away with not paying for their Social Security and Medicare payroll taxes, unemployment insurance and workers comp.

“I’m not sure it’s an epidemic. It’s a very fact-intensive issue,” Emanuel said. One of the highest-profile instances of misclassification of workers as independent contractors involves port truckers in Los Angeles-Long Beach, whom the Teamsters are trying to organize. Califor-nia judges have repeatedly ruled that trucking firms misclassify port drivers as independents.

Kaplan was another matter. As a top GOP staffer for the Republican majorities of the House Governmental Affairs and Education and the Workforce Committees, he helped author legislation that tried to overturn NLRB rulings. Kaplan also worked on the controversial multi-employer pension law the GOP pushed through several years ago. That issue didn’t come up.

When Sen. Bob Casey, D-Pa., asked the two a “yes or no,” question, “Do you believe in the NLRA?” Emanuel answered “yes,” while Kaplan said “we’re bound by it.” He didn’t back it.

On the labor law issues, Kaplan claimed he ”was doing what they” – his congressional GOP bosses – “asked.” Those issues included GOP attempts to overturn NLRB rulings (a)  which removed employer-erected roadblocks to recognition elections (b) allow unions to organize parts of one enterprise and not the whole, and (c) hold both corporate headquarters and individual franchise owners are joint employers responsible for obeying or breaking labor law. In another duck, Kaplan did not say how he would rule on those issues at the NLRB.