Tribute to military veterans dedicated on their day

Retired Norfolk Southern conductor and U.S. Army veteran Kenneth Rospert has always held military personnel in high regard, and an idea he had four years ago to honor local veterans has finally come to fruition.

On Veterans’ Day 2012, nearly 1,000 people gathered in Bellevue, Ohio, for the dedication of the city’s Fallen Soldiers Memorial.

“There has never been anything to honor soldiers from Bellevue who served or were killed in the line of duty, so I felt this was something we needed to do for our community,” Rospert said. “I was still working at the time, but I knew it wasn’t something I could accomplish until after I retired.”

A member of Local 225 at Bellevue, Rospert serves as chairman of the board of the Firelands Federal Credit Union. He asked the board to consider a donation of land for the memorial and the board agreed to donate a portion of commercial property in downtown Bellevue.

“I visited a lot of other veterans’ memorials and brainstormed with other veterans to accomplish what we wanted to accomplish,” Rospert said. “A lot of people stepped up for this project and all the work was done by volunteer help.”

The monument recognizes all Bellevue veterans and all branches of the U.S. military. It consists of a large headstone with the names of all Bellevue veterans killed in the line of duty since World War I. It is surrounded by flags honoring each branch of the military and has an American flag and a POW flag at its center.

“We raised money for the big headstone by selling pavers that have the names and ranks of all local soldiers killed in the line of duty, or who wore the uniform. We also received money from individual donors and the Bellevue Hospital was a corporate donor,” Rospert said. “Each paver tells a story of somebody’s father or mother, brother or sister, and it has all their information.”

Firelands Federal Credit Union had its beginnings at the railroad in 1955, when seven Nickel Plate employees joined together to form a financial savings club. Each of them put in $5 to $10 and they applied for a charter from the federal government in 1957. In 1970, it was opened to anyone who lives or works in the community and currently has 26,000 members.

“My son was a big motivating factor behind this. He served four tours of duty, twice in Afghanistan and twice in Iraq, as commander of the Army Rangers’ assigned to the 82nd Airborne,” Rospert said. 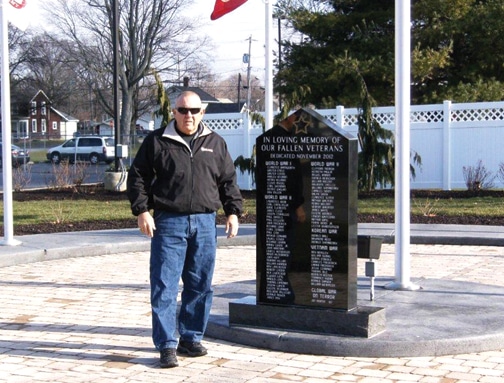 Retired conductor Kenneth Rospert stands beside the Fallen Soldiers Memorial in Bellevue, Ohio,
in December 2012, a project he oversaw from start to finish.