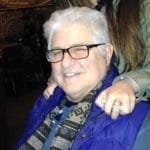 Robert “Bobby” Bonds passed from this life October 29, 2015 at the age of 61. Bobby is survived by his wife, Ronna, and four (4) children, Max, Madalyn, Danielle and Andrew, his mother Marie and brother Richard.

Bobby was employed by Amtrak for nearly 4 decades.  Most of his long career was spent as the Director of Operation Redblock, where he committed himself to a life of service to his fellow union members and keeping our brothers and sisters in Labor strong.

Bobby committed his life to helping others, often when they were at the lowest moments of their lives. Most of us are happy if we change or improve one life. Bobby changed the world for the better and improved the lives of all who knew him. But Bobby didn’t stop there, while he was busy giving compassion and guidance, he also challenged us to do more, be better and reach higher.  When you talked to Bobby, you knew that you were the focus of all his attention and in that moment nothing was more important.

But Bobby also knew that none of his efforts would have been possible if not for his loving family, who sacrificed so much when they allowed him to be the generous man that he was. We share in their grief, and offer them our thoughts and prayers.

In remembrance and honor of Bobby’s contribution to so many, we take this opportunity to paraphrase what many have to say about him:

To have known Bobby is to know that his outlook on life was truly positive, and never without possibilities. He truly believed that it is possible to manage our way through all our challenges, no matter how difficult they may seem.

He truly believed in the concept of peer involvement to prevent employee use of alcohol and/or drugs while on duty or subject to call. Bobby also challenged and educated everyone he met to aspire to that same concept.

Bobby was a man of character. His word was his bond, which he never broke. He was a model of ability and competency.

He was determined, dedicated, compassionate, tireless, a consistent and credible leader, and above all else, a trustworthy friend.

Bobby possessed integrity and a sincerity that was unyielding and infectious.

He was a decisive, analytical, change-agent, tenacious, caring, considerate, and most importantly, someone with a huge heart. His style of transformational leadership will serve to engage, challenge and inspire the community.

Bobby’s ability of bringing people together even in the most adversarial conditions is unprecedented. He was a man of principle, and commitment.

It was a gift to have met, known and worked with Bobby, but we should not forget the richest gift he gave us is his message of hope and perseverance, and that we are sustained when we step in and help each other whenever there is a need. Throughout his life, Bobby saved and changed 10,000 other lives. Those people touched and inspired by Bobby then went on to help others. In using that math, we can confidently tell you that Bobby changed and saved millions of lives, and that story continues through us…