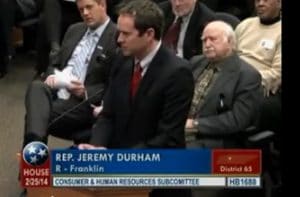 In another example of the “war on workers,” Tennessee Representative Jeremy Durham (R-Franklin) introduces a bill denying the First Amendment right to free speech pertaining to a citizen’s right to picket.  He makes it very clear his real reason for wanting to pass this bill when he quotes an article stating “Tennessee unions quietly added 31,000 members in 2013, representing the largest percentage increase in union membership in the country. I just feel like if that’s such a growing part of our economy that we need to take some preemptive measures.”