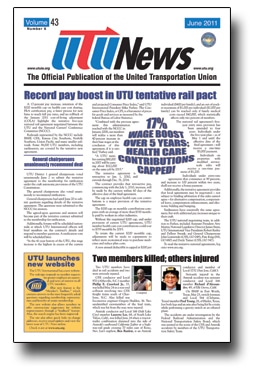 Members of the UTU National Rail Contract Negotiating Committee, assisted by International officers and general chairpersons, are barnstorming the nation, holding face-to-face meetings with members to explain the tentative agreement and respond to questions.

The meetings began last week and continue through early August — prior to voting packages being mailed to some 38,000 members eligible to vote on the agreement.

A slideshow, shown at these meetings, provides an overview of the agreement; and a link to that slide show is found below.

A listing of meeting locations and dates can be found be clicking on another link, below.

A link also is provided to a webpage with additional information, including a link to the actual agreement.

Key points being explained to members include:

* This agreement exceeds the level of price inflation by more than any previous national rail agreement in the 41-year history of the UTU. Although the excess of the wage agreement over price inflation may appear greater in the 1970-1973 agreement (as shown graphically in a slide), that agreement didn’t account for cost-of-living adjustments; and there were givebacks, including changes in interdivision service, road-yard demarcation and run-throughs. There are no givebacks in the current tentative agreement.

* Price inflation, as computed by the Department of Labor, includes increases in costs of such items as food, autos, gasoline, clothing and other consumer goods and services. Wages that exceed price inflation provide members with greater everyday purchasing power.

* The $200 monthly cap on health care insurance assures that members will pay considerably less than is being paid by federal workers and workers in the private sector (as shown graphically in a slide). That slide also shows that were this agreement not ratified, and the existing formula for health care insurance premiums continued, members would pay considerably more than $200 monthly.

* A significant provision in this tentative agreement maintains the $200 monthly cap for 6 ½ years, or 18 months beyond the reopening of the contract. There are certain to be increases in existing health care insurance premiums for federal workers and other private sector workers during this period – workers already paying considerably more than the $200 monthly cap provided in this tentative agreement.

* While it is alleged by some that the UTU National Rail Contract Negotiating Committee could have extracted more from the carriers owing to record-profits of major railroads party to the agreement, the fact is that carrier profitability has been ruled by neutral arbitrators not to be a valid reason for increasing wages.

* Said Arbitration Board No. 559 in 1996: “We do not think that ‘bigness’ alone or profits by themselves are permissive reasons for recommending wage increases … in our view, the union’s claim that current profit levels justify greater wage increases does not fly.”

* Were this agreement not to be ratified, third parties would decide. A presidential emergency board would consist of neutrals, all aware that President Obama froze wages of federal employees for two years, that federal employees’ health care premiums are more than double the $200 cap in this tentative agreement, that 46 million Americans have no health care insurance, and millions of unionized workers have suffered wage cuts, loss of health care benefits and loss of pensions.

* Historically, rail unions do poorly after rejecting tentative agreements. Many members recall the devastation in 1991 of PEB 219 recommendations, when two of the most labor-friendly lawmakers – Rep. John Dingell (D-Mich.) and Sen. Ted Kennedy (D-Mass.) — chaired the committees of jurisdiction.

* As National Legislative Director James Stem counsels: “This agreement provides significant financial improvement and economic stability for our families. Any other option would be a big gamble we cannot afford to take.”

To view the listing of meetings scheduled for locals, click on the following link:

To view the webpage with more comprehensive information on the tentative contract, click on the following link: