Stand With Our Brothers and Sisters At NJ Transit 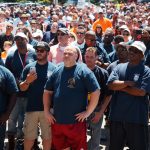 After five years of working without a contract and receiving hostility from management, our brothers and sisters employed at New Jersey Transit are facing a March 13 deadline for a strike or lockout. This would affect 150,000 people who commute daily on trains and 280,000 who take buses.

NJ Transit has ignored a Presidential Emergency Board recommendation for common sense and modest annual pay increases and better health care coverage.  These proposals would cover the next six years.

NJ Transit has also ignored a bipartisan group of Democrats and Republicans across the state’s congressional delegation, which sent a letter urging NJ Transit to seriously consider the board’s recommendations.

Instead, NJ Transit wants to impose a significant increase in health care costs that would wipe out any wage increases for its own employees.

The International Association of Sheet Metal, Air, Rail and Transportation Workers (SMART) urges every local union and supporter who can make it to attend an important rally this Saturday, March 5th.

They need our support and solidarity now, more than ever.  Wear your union colors, show your union pride and take a stand for your brothers and sisters!

Across the street from Woodbridge Train Station