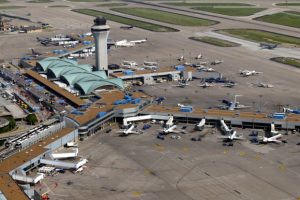 An icon among airports worldwide, St. Louis’s Lambert International Airport rose to international prominence in the twentieth century, thanks to its association with Charles Lindbergh and his Spirit of St. Louis, as well as its position as the hub of Trans World Airlines (TWA). One other important feature of this airport—recognizable for years to the millions of travelers who visit St. Louis by air—has been its iconic terminal and signature copper roof. Designed by Minoru Yamasaki in the 1950s, the building and its copper roof inspired the design of other terminals, such as some at John F. Kennedy International Airport in New York City and Paris-Charles de Gaulle Airport in France.

Tragedy struck in April 2011, as a category E3 tornado hit the St. Louis metropolitan area with 135 mile per hour winds. The tornado left a trail of destruction along its path, including extensive damage to the airport’s iconic terminal that left the copper roof in tatters.

Due to budget constraints that have been a reality for public transportation authorities nationwide, St. Louis airport officials found it more economical to replace rather than repair the cooper roof. They selected Missouri Builders Services, Inc. from Jefferson City to perform the roof replacement.

The roof was torn down to the concrete decking, then a new vented nail base was installed with the metal on top. The roof and flashings material made up approximately 125,000 square feet total, covering approximately 77,000 square feet of roof. The roof was constructed of .0216 CopperPlus by Heyco Metals. There was an extended lead time because the panels required a 30” coil, and Heyco only stocks 24” coils in the USA. The 30” coils had to be shipped over from Germany to complete the project. The entire roof system is vented through perforated stainless steel venting at the center parapets and perimeter walls. Missouri Builders Service, Inc., employed an average of 17 sheet metal workers throughout this project.Sheet Metal Local 36 and the contractor Kozney Wagner performed the work, honoring the St. Louis Agency of Training & Employment’s goal of using apprentices, women, minorities, and city residents on this project. 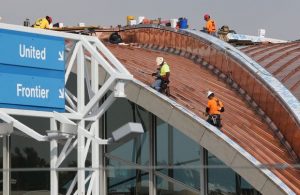 Heyco Metals’ CopperPlus features two outer layers of 100% copper bonded to a core of stainless steel. The resulting product offers the increased strength and reduced thermal properties of stainless steel. It can be soldered just like copper, only more easily. The lower thermal conductivity allows a worker to quickly soft-solder it, using smaller, cooler irons.

The product, which was first introduced in the 1960s, can be cut to any desired length and formed into virtually any shape. Much stronger than copper at a thinner gauge, it is widely used in tornado-prone areas across the Midwest.

According to Sheet Metal Local 36 Business Manager David Zimmermann, “The new skin will have the shine of raw copper like it did back when the terminal was built in the 1950s. The roof will slowly transform in color over the course of time, while always staying true to its historic origins that make it a unique landmark for travelers coming to the Midwest.”