The Federal Railroad Administration (FRA) published a Notice of Proposed Rulemaking (NPRM) in the Federal Register August 22. This proposed rulemaking from the FRA is a direct result of Section 11307 of the FAST Act which requires FRA to implement a pilot program for competitive selection of petitioners other than Amtrak to operate up to three long-distance routes currently operated by Amtrak. The final rule will establish the procedures for interested parties to submit bids and the information that petitioners must submit to FRA. It will also establish the procedures for the Secretary to evaluate bids, and select and notify selected petitioners, should there be any.

SMART TD, TTD and all of rail labor opposed this concept and other privatization mandates as the bill was going through the legislative process and fought to remove it or include conditions that would protect workers and create a level playing field if it ever went into effect. In the end, while the pilot provision stayed in the final bill, a number of conditions were attached to it at our request and it was limited to three long-distance routes. Given the political realities we face on the Hill and the opposition to Amtrak that exists, this was not an easy task.

Yesterday, September 6, the Transportation Trades Department (TTD) of the AFL-CIO commented on the proposed rule published by the FRA. Click here to read TTD’s comments.

“The comments filed by TTD urge FRA to ensure that labor, service and Buy America rules that attach to this program are fully implemented. Specifically, TTD’s comments call on FRA to ensure that so-called 4R rail employee protections cover workers impacted by this program. As TTD notes in their comments, we think the law requires this result, but we need to make sure the FRA implements this in the right way. I should note that Rich Edelman, on behalf of the BMWE (which was not included in TTD’s comments since they are not members) also filed comments. Edelman, who has a strong background in this area of the law, goes into more detail on the legal background on the protections which should be helpful. It is important to note that both TTD and Edelman’s comments are on the same page. (Click here to read Edelman’s comments.) They demand 4R act protections and our comments have a whole section that talks about why they are legally needed to be applied and specifically ask that the proposed regulations be amended to require any winning bidder be responsible for those protections. We also are asking FRA to issue guidance to adopt them to this situation.

“TTD’s comments also urge FRA to adopt hiring preferences and procedures for Amtrak employees and to ensure that any new entity is covered by rail laws just like Amtrak is today.

“We all need to keep this in perspective. Amtrak receives preferential pricing from the Class 1’s to operate over their track, something the Class 1’s have for years decried as inadequate. A new entrant will not likely receive nearly as good an operating rate as Amtrak currently does. If there is a winning competitive bidder on any of these three routes they will only receive 90 percent of the funding that Amtrak currently receives to provide the service making the bidding process even harder.”

Today, September 7, the FRA held a public hearing on the proposed rule. SMART Transportation Division National Legislative Director John Risch was at the hearing and testified on behalf of SMART TD. Click here to read his comments. 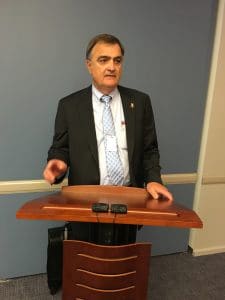