SEATTLE — SMART General President Joseph Sellers Jr. said Tuesday that the union will move in a unified direction at all levels in the fight against the ongoing attack on labor by monied right-wing interests.

His call to action at the second day of the SMART Transportation Division Regional Meeting came a week after the Janus v. AFSCME case that overturned the ability of public sector unions to collect agency fees from “free-riders” — people who are represented by a union and benefit from union negotiating on areas such as health care and contract negotiations but do not pay dues. 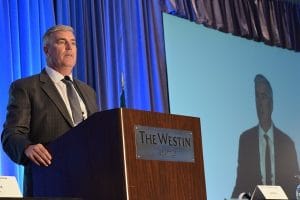 “Our theme — Strength through Unity — that is perfect and appropriate for this time,” Sellers said. “We need to roll our sleeves up. We need to put sweat equity into the changes that we need to make on behalf of our union, on behalf of your local on the behalf of the good and the welfare of our members and members to come.”

The 5-4 decision in a fractured U.S. Supreme Court drives a wedge between unions and the financial resources unions have to spend representing workers, weakening unions’ ability to represent and protect workers, Sellers said.

Janus is a reversal of the 1977 precedent-setting Abood v. Detroit Board of Education case, a 9-0 decision made by what SMART Transportation Division General Counsel Kevin Brodar described Monday as a “who’s who” of Supreme Court justices. Current Justice Samuel Alito and four other conservative justices banded together for the reversal.

And already the agents of big business are beginning campaigns to reach out to members of the affected public-sector unions — traipsing through neighborhoods and knocking on doors, trying to convince members to stop supporting their union financially.

“They’re going out there and they’re spending their money and the Koch brothers as we heard yesterday continue to go after unions and working people and working families,” Sellers said.

Those big-money businesspeople hate that unions such as SMART and other AFL-CIO members have financial resources to leverage — the Janus decision is one way those one-percenters are trying to reduce labor’s clout, divide unions and also to lower wages and benefits for workers.

“This is big business and this is the far-right. This is the majority at this time … but with our heart and our hard work, that will end in November,” Sellers said. “That is where our strength comes from — 200,000 members in our organization working together pulling on the rope together in the same direction, making sure that we are not weakened.”

He called upon local chairpeople to intensify their organizational efforts and communication — the union’s “grassroots campaign.”

“We need to be laser-focused as we fight back and take back one or possibly two branches of this government.”

Sellers said that the SMART Army’s community activism efforts, face-to-face contact and the use of avenues such as social media and text messaging will also help make SMART stronger, more united and improve communication with members.

“We need to make sure that we, at every level of this organization, are fighting back with one voice,” he said.

To join the SMART Army and stay up to date, members should text “SMART” to 21333 and follow the prompts. Messaging and data rates may apply.