(The following is a joint statement by John Previsich, President, SMART Transportation Division and Dennis R. Pierce, National President of the Brotherhood of Locomotive Engineers and Trainmen, regarding questions that have arisen since the fatal Amtrak derailment in Philadelphia on May 12, 2015.) 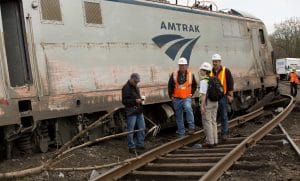 Photo courtesy of the National Transportation Safety Board

CLEVELAND, May 19 — Members of BLET’s Safety Task Force and SMART Transportation Division’s National Safety Team, in addition to representatives from the Brotherhood of Maintenance of Way Employees Division of the Teamsters Rail Conference (BMWED), are working with the National Transportation Safety Board (NTSB) to assist in the investigation of the catastrophic May 12 derailment of Amtrak Train 188.

Significant progress has been made in understanding how the accident occurred on May 12. That portion of the investigation is not yet complete, however, and even more work needs to be done to determine why the events
of that tragic night transpired the way they did.

BLET and SMART–TD do not make official comments about any ongoing NTSB investigation. Due to the number of press inquiries concerning issues not under investigation, however, we are providing the following information on why Amtrak trains on the Northeast Corridor are manned by a lone engineer in the control cab and why Positive Train Control (PTC) has not been installed on the Corridor.  The answers to both questions begin with the United States Congress.

Why a One-Person Train Crew?

In 1981, Congress passed legislation (the Northeast Rail Service Act of 1981) that ended the previous Conrail requirement that there be a second crew member in the control cab of commuter rail trains on the Northeast Corridor.  Armed with that legislative precedent — and mindful of where its funding originates — Amtrak has since 1983 refused to crew Northeast Corridor trains with more than one employee in the cab – the locomotive
engineer.  Although BLET and SMART–TD have steadfastly maintained that there should be two crew members in the cab of all trains to ensure public
safety, only Congress can change the 1981 legislation that reduced crew size on the Northeast Corridor.  But this is only one piece of a very large, complex puzzle.

Why No Positive Train Control?

On the heels of another catastrophic railroad accident in Chatsworth, CA, the federal government mandated in 2008 that Positive Train Control (PTC) be put in effect by the end of this year.  That was seven years ago. Even with that mandate in place, and with the exception of some railroads such as BNSF Railway, the industry at large has spent the interim finding reasons to avoid implementing PTC technology. They have created the situation about which they all now complain — they say they cannot meet the December 31, 2015 deadline.  Each death caused by the delay of PTC implementation is one too many, yet Congress is preparing to consider a blanket 5-year extension to 2020.  This is most certainly not in the public interest.

Since 2005, the NTSB has completed 16 investigations of railroad accidents that could have been prevented or mitigated with PTC. These 16 accidents
claimed 52 lives — many being BLET and SMART–TD members — and injured 942 people, with damages totaling hundreds of millions of dollars. NTSB has publicly stated that the accident on May 12, 2015 was also PTC preventable. There is no disagreement over the value of PTC technology.

That said, there is no technology available today that can ever safely replace a second crew member in the cab of the locomotive.  The only thing on a locomotive that is not a machine is the crew. The uncontrolled external environment in which trains are operated along with regulatory and operational demands of a safe transportation service demand a crew of at least two fully trained and qualified employees in the control cab of
every train. PTC is only a safety overlay that ensures a safer operation, and no technology can replace the level of safety provided when two crew members are on board and can serve as a check and balance to one another.

Even with all the safety-related technology that the government has mandated on commercial airlines, the public would never accept an airline operation with a single person in the cockpit. There is no reason that
rail employees and rail passengers’ lives should be viewed any differently.

Contrary to what some in government may say, the only place that crew size and PTC do connect is when it comes to funding. That is especially true in the case of Amtrak, because the government has woefully underfunded Amtrak since its inception. Additional crew members and new technology both cost money, and so long as those in Congress see fit to underfund the operation, they undermine their own mandate and shortchange the safety of the traveling public.

The SMART Transportation Division is headquartered in the Cleveland suburb of North Olmsted, Ohio. It is a broad-based, transportation labor union representing about 125,000 active and retired railroad, bus, mass transit and airline workers in the United States. It is a division of the  International Association of Sheet Metal, Air, Rail and Transportation Workers based in Washington, D.C.

The Brotherhood of Locomotive Engineers and Trainmen represents more than 55,000 professional locomotive engineers and trainmen throughout the United States. The BLET is the founding member of theRail Conference, International Brotherhood of Teamsters.