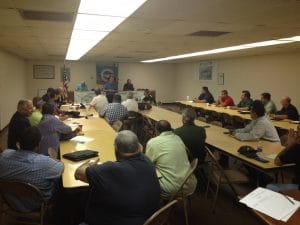 Byggnads construction union, SMART, and other building trades representatives meet and discuss Skanska in Houston, TX.
SMART has been participating in the global labor community in both the construction and manufacturing industries for the past 45 years and has developed strong relationships with sister unions in Europe and around the world. This has resulted in increased organizing strength and support for union representation in those sectors.

SMART plays a significant role in two major Global Union Federations (GUFs): the Building and Woodworkers International (BWI), a construction/ mining/forestry-based worker organization that is actively engaged with affiliate unions who represent workers employed at construction giants such as Sweden’s Skanska and Germany’s Hochtief (Turner Construction), and IndustriALL, a GUF that assists SMART in building relationships with other overseas national unions who have common employers in metal manufacturing and auto-related industries.

“In these times of increasing globalization in the construction industry, the relationships that we are forging with unions like the Swedish construction union Byggnads and the BWI are helping us acquire additional leverage to meet the challenges presented to our members by transnational construction corporations,” General President Joe Nigro stated. The consolidation and growth of the global construction market has been accelerating at breakneck speeds, with large construction companies like Manhattanbased Turner Construction having been acquired by German construction giant Hochtief 18 years ago. Since that time Hochtief was taken over by Spanish builder Actividades de Construcción y Servicios SA (ACS), which makes them one of the largest contractors in the world according to ENR’s top 250 Global Contractors for 2015; five of the top ten are Chinese.

Through the work of BWI, U.S., Swedish, and German union representatives, they have assisted in the negotiation of international framework agreements (IFAs) with global construction companies like Skanska—agreements that stress support of the International Labor Organization (ILO) core conventions supporting the right to organize and collectively bargain, among other rights (see inset for an example). These IFAs are used by SMART representatives to open dialog with these and other global construction companies—a process that has successfully gained more market share for many SMART local unions.

SMART Education Director Chris Carlough, who handles global strategies for SMART, also sits on BWI’s World Board as Vice President for North America and has been a key player in building the relationship between SMART and the Swedish union Byggnads. “The leadership of Byggnads, through their General President Johann Lindholm, has brought a whole new level of international cooperation to the table,” Carlough stated. “This will assist us with strategic campaigning and benefit our organizing strategies. I know the Swedes feel that helping the U.S. building trade unions gain market share here in the U.S. helps their union membership as well. They are truly great trade unionists.”

IndustriALL represents 50 million workers in 140 countries in the mining, energy, and manufacturing sectors and is a force in global solidarity, who is taking up the fight for better working conditions and trade union rights around the world. IndustriALL challenges the power of multinational companies and negotiates with them on an expansive global level. They fight for a new economic and social model of globalization, one that puts people and workers first.

Through IndustriALL, key relationships have been forged that have assisted in the successful conclusion of organizing campaigns and contract negotiations. In particular, a northeastern SMART local union was having difficulty coming to a first contract with a newly organized Swedish-owned company whose local management were attempting to surface bargain to impasse. Established relationships between SMART and the Swedish Manufacturing Union led to a visit by the President of that union. He attended several negotiating sessions, during which it was determined that local management was attempting to bargain unfairly. This information made its way back to Sweden, where the union president actually sat on the company’s board. The result was a change at the bargaining table and a new contract for SMART members in the northeast.

Last year the Skanska Works Council invited SMART to make a presentation at their bi-annual meeting, the first time a North American union has ever been asked to participate. Works Councils are bodies representing the employees of a company. Through them, workers are informed and consulted by management on the progress of the business and any significant decision at the European level that could affect their employment or working conditions. Works Council representatives may also be appointed to the Board of Directors. In some countries, like the U.S., workers have virtually no role in company management, however in places like Germany and Sweden, workers have an important role in the company’s management.

Most recently, the BWI and its affiliates were at the AFL-CIO Headquarters in Washington, D.C., where they were honored for work on their campaign to bring justice to migrant construction workers working on projects related to high-profile sporting events such as the World Cup. In close coordination with the global labor movement, BWI exposed the egregious violations of migrant worker rights in a sector of the economy where workers are often trafficked and exploited as forced labor.

Earlier that week the General Secretary—equivalent to our General President—of Byggnads, whose union represents 30 different building trades in one organization and the General Secretary of the Swedish Painters’ Union traveled to Houston, where they and a group of SMART organizers visited nonunion workers on jobsites. At one point during these jobsite visits a non-union superintendent told them, “This isn’t Sweden or New York City. This is Houston and we’re Right to Work!” There was much discussion after this regarding access for union representatives on construction projects here in the U.S.

According to SMART General President Joe Nigro, “We are taking our global relationships to new levels that will give our organizers and representatives the most effective tools to position themselves and the workers they represent with global construction companies. We are looking forward to working closely with our brothers and sisters from around the globe.”

1. Freedom of association and the right to collective bargaining are respected

All workers shall have the right to form and join trade unions of their own choice. These unions shall have the right to be recognized for the purpose of collective bargaining in conformance with ILO Conventions 87 and 98. Workers’ representatives shall not be subjected to any discrimination and shall have access to all necessary workplaces in order to carry out their duties as representatives (ILO Convention 135 and Recommendation 143). The company shall take a positive attitude to trade union activities, including union access to workers in the organizing process. The company will follow the most efficient process in the event that BWI affiliate requests union recognition.