Union Sportsmen’s Alliance (USA) member Lindsay Lanning was flipping through her SMART Journal when the words “Stalking Your Dream Hunt?” caught her attention. It was a page about the USA and Carhartt Ultimate Elk Hunt Sweepstakes—a trip to honor the American worker by awarding one union member and a guest with a guided, five-day elk hunt in New Mexico’s Gila National Forest, valued at approximately $22,000.

“You can’t win if you don’t play,” she thought as she entered. 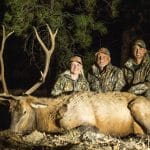 As a member of SMART TD Local 1629, Lindsay’s job primarily consists of switching cars in the rail yard using a remote control box to control the locomotives, but she also loads and unloads an auto facility.

“Railroad unions are the oldest unions, and my union is very important to me,” Lindsay said. “The union is constantly negotiating and fighting for things like our pay, healthcare and laws to keep two-person crews. The union also protects us from unlawful termination due to injury, they guarantee due process and investigations before any discipline, and they fight for lost wages.”

Lindsay learned that her union benefits go well beyond the workplace when she was selected as the grand prize winner of the USA/Carhartt sweepstakes from nearly 5,000 entrants. The hunt was an amazing opportunity that got even better when Lindsay made an unexpected discovery about the outfitter.

“When I won the hunt, I contacted a long-time family friend, Danny Parker, who lives in Chino Valley, Arizona, to ask if he knew the guides with Big Chino Guide Service,” Lindsay said. “To my surprise, he said he knew them well; he grew up with the owner, JP, and watched JP’s boys, who are now the main guides, grow up.”

Lindsay chose to bring her father Dana Lanning of Phoenix, Arizona, on the hunt with her. Dana was a member of Operating Engineers Local 428 for more than 30 years and is currently a member of Electrical Workers Local 769.

When Lindsay learned Parker would be helping on the hunt, she asked if her brother, Dalton, could tag along too. Dalton is in the Air Force and, until recently, was stationed out of the country, causing him to miss many family hunts. With the help of Parker, that was made possible for the Lanning family. 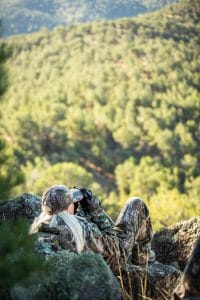 During the five-day hunt, Lindsay’s father and brother took turns joining her in the field. Whoever wasn’t with her, the guide and the camera crew, glassed with Parker and the other guide on a different ridge.

“Ultimately, bringing home meat and enjoying quality family time outdoors are the most important things about hunting to our family, and we never expect to bring home a trophy,” Lindsay said. “This New Mexico hunt differed greatly in that we saw elk every day but could pass them up in hopes of finding a bigger bull.”

By luck of the draw, it was Lindsay’s brother’s turn to go with her and their guide to a blind overlooking a water hole where a nice bull had been spotted. It was the last evening of the hunt, and they were waiting as patiently as they could.

“We had one cameraman on the left end, a guide in the middle, and myself on the right end with the muzzleloader on a tripod in front of me,” Lindsay said. “We were all sitting on the ground in this small blind. My brother sat right behind us, leaning against a tree.”

The wind was in their favor as they quietly watched the water hole. And then it happened. Dalton caught sight of giant antlers coming from behind the left side of the blind.

“My heart immediately began pounding out of my ears, and I was certain the elk could hear it,” Lindsay said. “We all sat perfectly still, frozen in awe of this magnificent creature, cautiously making his way to the water hole in front of us.”

The elk made it far enough for a 45-degree angle shot to Lindsay’s left, but she couldn’t move the gun in his direction or he would see it.

“Whether the elk winded us, saw us or just got nervous, he turned and bolted straight back to where he came from, completely opposite of where I was positioned,” Lindsay said.

The guide jumped up and whistled in an attempt to stop the bull, while simultaneously grabbing the gun and repositioning it straight left through the blind.

“Miraculously, the bull stopped, and I was able to get down in the scope and take a shot—right between the guide and the camera guy!” Lindsay said.

The bull took off, but only a few seconds later, Lindsay’s brother said he heard him crash.

“Had Dalton not spotted the bull out of the corner of his eye and alerted us early, we could have easily blown our cover,” Lindsay said.

Lindsay had never seen her brother so excited before. Her dad and the rest of the crew arrived within 10 minutes to join in the celebrating.

Aside from going home with elk meat for the freezer, Lindsay and her family were treated to free gear from several companies including Carhartt, Burris Optics, Flambeau Outdoors, Buck Knives and Thompson/Center Arms.

While this may have been Lindsay’s first time hunting with a muzzleloader, it was not her first time big game hunting. She began putting in for junior elk hunts when she was around 12-years-old, and got her first cow tag at age 15. Lindsay has one cow elk to her name from a hunt seven years ago, and now she can proudly add a bull to the list.

“I owe my hunting background to my dad,” Lindsay said. “As far back as I can remember, my dad would go hunting with his brothers or friends, and I was always so excited to see what was in the back of the truck when he came home!” 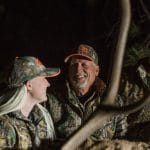 In their earliest hunting experiences, Lindsay and her brother played the role of bird dogs. Their dad would hunt dove and quail while they ran around picking up the birds and shotgun shells.

Being the grand prize winner of the USA and Carhartt Ultimate Elk Hunt Sweepstakes provided the perfect opportunity for Lindsay to experience an amazing elk hunt with two of the most important people in her life.

“This hunt was a once in a lifetime opportunity and something we never would have treated ourselves to, at least not without winning the lottery,” Lindsay said. “We owe the biggest thanks to Union Sportsmen’s Alliance and Carhartt for organizing this hunt and to Big Chino Outfitters. Without their extensive knowledge and sense of dedication to my father, brother and I, we wouldn’t have brought down the awesome bull elk.”