On Tuesday, December 1, SMART members from sheet metal and transportation locals in Los Angeles joined their brothers and sisters in the Jobs to Move America coalition to lead the protest outside the headquarters of BYD Motors, Inc. – a Chinese-owned electric bus company that failed on a promise to create living wage jobs for local residents, in exchange for over $39 million in government tax dollars.

The protests caught the attention of Los Angeles city officials who are now seeking documents from BYD in an investigation of the company’s failure to make good on its promises.

SMART and the Jobs to Move America coalition are working to ensure that work contracted by local and municipal transit authorities is secured by American and union-represented employers. SMART will continue to work on behalf of workers at BYD to secure fair representation, free from company harassment. 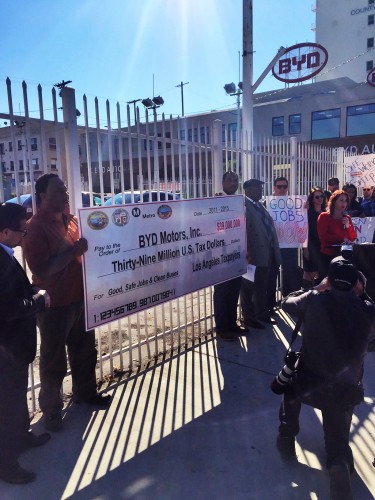