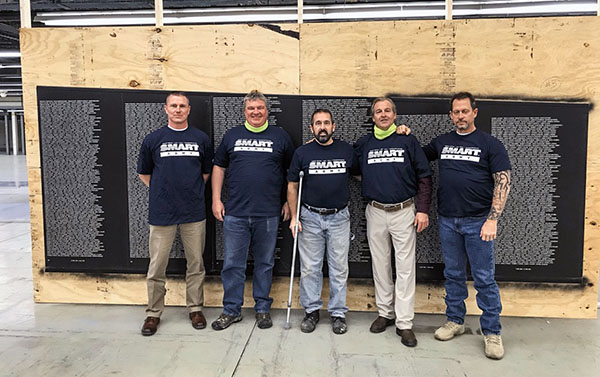 With 1,534 of the 58,320 names inscribed on its black anodized aluminum surface representing fallen heroes from Indiana, the new Vietnam Veterans’ Healing Wall at the Veterans National Memorial Shrine and Museum in Fort Wayne, Ind., has a special meaning for veterans in that state, while paying tribute to everyone who made the ultimate sacrifice for their country.

It is also a source of pride for SMACNA member Morris Sheet Metal Corp. and the Local 20 Fort Wayne SMART Army, which pooled resources to turn this long-awaited project into reality.

“It first came on our radar in December 2020, when it was announced that a replica of the wall would be erected in Fort Wayne,” said Darryl Esterline, business representative for SMART SM Local 20. “Given the importance of the project to so many families, we told the organizers that the SMART Army would volunteer our services to honor our fallen heroes.”

“Given the importance of the project to so many families, we told the organizers that the SMART Army would volunteer our services to honor our fallen heroes.”

The Healing Wall is a replica of the actual Vietnam Wall in Washington, D.C., and is 80% the size of the original. It stands 8 feet tall, is 360 feet long and is made up of 72 panels. The arrangement of the wall is such that the names of service members who lost their lives are in a ‘V’ configuration, with the 8-foot panels in the middle of the ‘V’ tapering down to the smallest on the ends, which are just 2 feet tall.

The wall toured the country for a decade, and public donations enabled the shrine in Indiana to purchase the panels last December, at which point they were put into storage while concrete footers, support structuring for the wall and surrounding grounds were prepared to receive the panels.

The remaining challenge was overcome thanks to Local 20’s essential contribution — a system that would fix the panels to the concrete firmly, but without undue visual clutter.

Morris Sheet Metal provided CAD drawings and sample mockups, followed by approval of the fasteners and shop fabrication. In addition to the fasteners not being visible, the panels were set slightly away from the concrete, allowing for seasonal expansion and contraction.

The Local 20 SMART Army came up with an innovative way to ensure the system worked.

“We created a prototype by building our own panels and test mounting them on a plywood wall,” Esterline said. “That way, we avoided any potential damage to the real panels, and on-site installation would be that much easier.”

“We were able to complete the project in advance of Veterans’ Day, and the unveiling ceremony took place on May 29,” Esterline added. “If there was a single image that made our efforts worthwhile, it was that of Fort Wayne Commander Greg Bedford of the Veterans’ National Memorial Shrine and Museum. He watched as we hung the first panel on site, and tears rolled down his cheeks.”