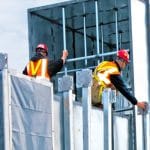 The term “higher education” can take on many connotations. Where some believe it means attending a two- or four-year college or university, there is another side to higher education – apprenticeship in the skilled labor trades.

Apprentices at more than 153 unionized sheet metal training centers across the United States and Canada go to classes, attend labs, earn grades and receive on-the-job training in four- to five-year programs. Apprentices are paid while they work to become journeymen, and, usually, they graduate debt free. While they don’t march down the aisle in caps and gowns for graduation, they are rewarded with hourly wages above and beyond those many university graduates can hope to make until they have “paid their dues” – if they ever receive comparable earnings.

Curricula for the country’s sheet metal workers are developed by the International Training Institute (ITI), the education arm of the unionized sheet metal and air conditioning industry. The apprenticeship program isn’t for people who failed at college or wanted to choose another route to a stable income. The program is for serious individuals who want to pursue an education, skill level and career in a trade such as the unionized sheet metal industry.

These skills take education, dedication and talent. The labor trades aren’t reserved for the less-intelligent. They are necessary career paths important to the proper functioning of the country and are there for those who take interest in a different kind of work.

This spring, Mike Rowe, formerly of Discovery Channel’s “Dirty Jobs,” testified on Capitol Hill for more attention to be paid to the jobs that need to be done by the skilled labor force.

“The reality is: look at the opportunities that are out there, make a case for the trades, and stop with this idea that there’s only one way to get educated,” he said.

Once the education is earned, jobs are available as well. It varies by state, but jobs are available, and more are on the horizon and on major projects such as the new Minnesota Vikings or Atlanta Falcon stadiums, airport renovations and new construction of high rises and office buildings around the country.

First Lady Michelle Obama’s new initiative, Reach Higher, focuses on inspiring all American students to take charge of their future by pursing and completing their higher education – and that includes apprenticeship.

In April, Vice Pres. Joe Biden announced the launch of the Registered Apprenticeship College Consortium (RACC), which is intended to bridge the gap between colleges and registered apprenticeship programs, allowing graduates of these programs to earn college credit for their training.