WASHINGTON – On the floor of the U.S. Senate, Sen. Heidi Heitkamp Feb. 10 shared the heroic story of Geoff Andersen, an engineer in training for Burlington Northern Sante Fe Railway, from Larimore, N.D., whose actions during the recent train derailment near Casselton, N.D., prevented the dangerous explosions from the crash from spreading farther.

(Andersen is a member of SMART Transportation Division Local 525 at Grand Forks, N.D.)

As a former civilian firefighter for the Grand Forks Air Force Base, Geoff was quick to think of a plan to unhook remaining oil cars and pull them safely away from the explosion. Donning fire-fighting gear he borrowed from the Casselton Fire Department, Geoff bravely walked towards the fire to connect the tanker cars in danger of exploding to the rear facing locomotive and haul 25 cars away from the fire. Had it not been for Geoff, the explosions following the train derailment would have been much worse.

Click here for video of of Heitkamp telling Anderson’s story on the Senate floor.

Here are Sen. Heitkamp’s floor remarks to honor the heroics of Geoff Andersen:

Mr. President – I rise today to honor the heroics of Geoff Andersen, an engineer in training for Burlington Northern Santé Fe railroad whose bravery following the recent train derailment near Casselton, North Dakota, prevented the dangerous explosions from the crash from spreading farther.

For many of us in the Senate, the Casselton derailment has trained our focus on efforts to improve safety for the rail shipments of crude oil.

From increased track inspections to updated tanker car standards to the consideration of new routing options for crude shipments – all angles for improving the safety of crude rail shipments are being considered.

What should not be overlooked in our efforts, however, is the importance of skillful and well trained railmen on the lines. Railmen like Geoff Andersen are the backbone of the industry, and when one goes above and beyond the call of duty to prevent a disaster from spreading, they deserve to be recognized.

An axel broke on a car near the middle of the train, forcing the car off the rail and onto the tracks of the adjacent line carrying trains in the opposite direction.

Conductor Bruce Anderson and Road Foreman of Engines Paul Douglas radioed the emergency to the oncoming train on the opposite tracks, but there was insufficient time to slow down the train heading their way.

In the brief moments following the derailment, an eastbound train carrying crude oil collided with the soybean car laying over the tracks and exploded.

Following the crash, Geoff and the entire crew from the westbound grain train sprang into action.

Immediately following the derailment Conductor Bruce Anderson went back and pulled approximately 50 cars away from the fire.

Geoff – a former civilian firefighter for the Grand Forks Air Force Base – borrowed two radios and fire protection gear from the Casselton Fire Department. His Engineer and trainer, Tom Cooks, jumped into the rear engine of the train to reverse the locomotive towards the fire and connect the train to the tanker cars in danger of exploding.

Geoff, armed in fire protection gear, walked towards the fire to connect the train to the cars.

He then walked even closer to the fire to pull the pin on the closest tanker car within a safe distance, getting 25 more cars away from the fire.

Once the pin was pulled, Geoff radioed to Tom to pull the cars away.

Because of Geoff’s heroics, the dangers from the derailment were minimized and the explosions were isolated to the tanker cars adjacent to the derailments.

Had it not been for Geoff, this disaster would have been much worse.

I would like to take this time to thank not only Geoff Andersen – but all those involved in the response including Engineer Tom Cooks, Conductor Bruce Anderson, Road Foreman of Engines Paul Douglas, Casselton Fire Chief Tim McLean, and Casselton Assistant Fire Chief Adrian Kieffer – for their presence of mind and decisive action following the crash to minimize the damage from the derailment. 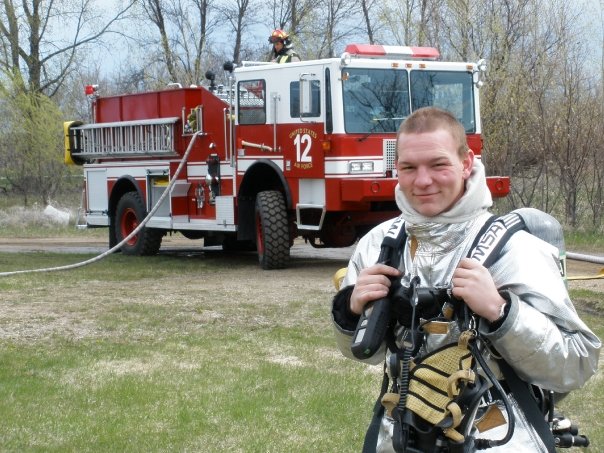