State of the union: ‘Stronger than ever’ 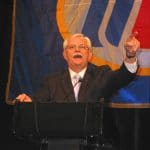 “Before this administration took office Jan. 1, 2008, people said we couldn’t organize, couldn’t negotiate with carriers and couldn’t solve the union’s financial problems,” Futhey said. “We proved them wrong on each allegation. The UTU is stronger than ever.

“As this administration completes its fourth year in office,” said Futhey, “an average of one new air, bus, rail or transit property has been organized every seven weeks, two national rail agreements have been negotiated providing a combined 40 percent wage increase, the latest tentative agreement provides the highest increase in excess of the Consumer Price Index in the UTU’s 41-year history, and UTU and UTUIA finances have been improved dramatically.

“The UTU Collective Bargaining Defense Fund helped finance a petition drive in Ohio that put on hold – pending a November voter referendum — a bill to eliminate collective bargaining rights,” Futhey said. “In Wisconsin, UTU members were among the leaders of a successful petition drive forcing supporters of an anti-union bill to face recall elections in July and August. The Ohio and Wisconsin efforts forced political extremists in Indiana to shelve legislation to eliminate collective bargaining rights.

“UTU political activism has awakened and outraged voters in numerous states where political extremists are attacking middle-class values, including efforts to curtail their ability to vote through tougher registration procedures and fewer absentee voting days,” Futhey said. “We will do all we can to protect the integrity of the voting system.”

At the UTU International, said Futhey, automated billing and auditing, coupled with targeted cost cutting, reassignment of functions and upgrading of information technology allowed International funds to increase from $7.5 million to nearly $16 million. “There is no proposal for a dues increase at the upcoming quadrennial convention,” Futhey said.

The Discipline Income Protection Program reserve fund was turned from a $2 million loss in 2007 to a positive balance of more than $5 million today, “allowing sufficient funds to provide the protection UTU members expect and deserve,” Futhey said. “The UTU Insurance Association surplus has been made stronger and now stands at near $26 million.

“Our computer-based UTU University – a classroom without walls – is training officers to better serve their members at the negotiating table and in grievance handling,” Futhey said. “The awards data search engine has been improved, regional meeting workshops have been expanded to meet member requests, iLink provides better access to controlling awards and offers secure chat rooms for various levels of elected officers to exchange information and ideas.”

Among other achievements cited by Futhey: