He spoke about the beginnings of the RRB, pensions and retirement plans, attacks on workers in both the public and private sectors.

Read the complete text of Barrows address below.

“Thank you, Mike (Futhey) for the invitation.

“It is truly an honor to be here with you today (July 29) and to have the privilege of addressing SMART Transportation Division members and questions.

“Our retirement system is something all of rail labor can be proud of and it is certainly worth fighting for. There were many challenges to establish the Railroad Retirement Act and challenges have continued over its 78-year history.

“The first contributory private pension plans were established in the railroad industry in late 19th century, on the Grand Trunk Railway of Canada and then on the B&O Railroad. By the end of the first decade of the 20th century, 66% of railroaders were covered by some type of private pension. The number grew to over 80% at the beginning of the great depression. The pioneer trade unionist of the SMART’s predecessor unions were a part of the establishing these early pension plans.

“The problem with the plans was that the benefits provided by these plans were inadequate. A 1930s survey of the plans showed that while 80% were covered by the plans, that because of restrictions in the plans, only 17% of railroader workers would ever qualify for the benefits. In addition, the plans were easily terminated by the railroads and gave little or no assistance to disabled workers or survivors.

“When the Great Depression hit, the already unstable railroad pension plans were thrown into a state of crisis. Railroad unions sought a separate federal retirement system. The system would consolidate the existing railroad plans into a uniform national plan. The first law was passed in 1934 and the railroads immediately went to court to challenge the new law. The Supreme Court sided with the railroads, and in a 5 to 4 decision deemed the law unconstitutional. The unions went back to Congress and, in 1935, a new law was passed. Again the railroads went to court to challenge the law. This time the court held some of the law to be constitutional but deemed other parts of the law unconstitutional. In 1936, President Roosevelt asked labor and the industry to work out their differences. An agreement between rail labor and the rail industry was enacted in the 1937 amendments to the Railroad Retirement Act.

“Since that time, there have been nine significant pieces of legislation that made changes to the system. Many of those changes resulted in improved benefits. The 1937 law did not include occupational disability, spouse or survivor benefits. These were all added later. Other changes improved funding of our pension. In the 1970s and 1980s, the system faced a funding crisis. This was due in large part to sharply declining employment and increased benefit costs brought on by very high inflation. Labor and the rail industry agreed to changes that addressed the problems.

“The fight to protect retirement benefits for American workers is never over. No, this fight is an ongoing battle. If you read the newspaper or turn on the TV, it seems like every day there is another assault against American workers and their pension plans.

“Since 1985, 84,350 pension plans have been ended by employers. We have gone from nearly 50 percent of U.S. workers covered by a defined benefit plan to about 15 percent covered.

“Rail workers find themselves in a unique situation. They have good wages, they have good health care and they have a good retirement system. But all around us that is not the case;

“All around us workers are making less,

“All around us workers are losing their good health care coverage.

“And all around us workers are losing their defined benefit pension plans.

“Defined benefit pension plans have been replaced by tax deferred savings accounts, like 401(k) plans, and other less desirable substitutes. During that same period, we have seen good health care plans replaced by high deductible plans that only provide catastrophic coverage. We have seen industries that paid a good living wage, now paying wages you can barely live on.

“It is happening all around us. Workers in the manufacturing, steel, airline, and auto industries have all seen their pension plans stripped away. And now we see a new attack on public workers.

“While other workers watch their standard of living recede, their health care becoming too costly, and their retirement security stripped away, we cannot sit back and believe this will not impact us.

“For far too many workers, the defined pension plan is becoming a relic from a past generation. And with the disappearance of pension plans, far too many Americans cannot retire with any sense of dignity or security.

“Recently, a union member asked me, “What am I going to get out of the money I’m paying into Railroad Retirement?”

“Good question. You see workers are being told they would be better off if they saved their own money. Let me tell what you get. 60/30, occupational disability after 20 yrs, and a survivor benefit that far exceeds most retirement plans. For the career railroad worker who retired in 2012 at age 60 with at least 30 years of service, we estimate that over the lifetime of that railroad worker, Railroad Retirement will pay him and his spouse total benefits of about $2 million. That same worker under social security, who couldn’t retire until age 62, will receive with his spouse, benefits totalling about $900 thousand over their lifetime.

“Over our 78-year history, the Railroad Retirement Board has paid out over $300 billion in benefits to more than 5.5 million retired employees, spouses and survivors.

“Wondering if you will be able to receive a steady income during your retirement years is important to you and your family when you consider retirement. Well, railroad retirement gives you that assurance.

“You would think that the strength and solvency of our system would exempt us from attacks, but our retirement system is never totally safe from attack.

“On March 1 of this year, rail workers were again victims of Washington budget cuts, when their Unemployment and Sickness benefits were reduced 9.2% by the sequestration order. While no reductions were made to retirement, disability or survivor benefits, the RRB administrative budget, which is used to run the agency, was reduced.

“Our retirement system has faced many challenges over the 78-year history of the Railroad Retirement Act. At times its solvency was in question; at times the White House and Members of Congress questioned the need for a separate RR system; and at times, the commitment by the rail industry to the system was less than lukewarm.

“But every time there was an issue threatening the integrity and stability of the system, rail labor has met the challenge. That speaks volumes to the strength and solidarity of the rail labor movement.

“Let me say a little bit about the agency itself. I am proud of the RRB’s long history of excellent service to both active and retired railroad workers.

“That record of service is the result of nearly 900 Federal workers at the Board’s Chicago headquarters and 53 field offices who show up and work every day on behalf of railroad workers. As trade unionist, I ask you to defend Federal workers, like those who work on your behalf at the RRB.

“I applaud each and every one of you for your efforts to protect and carry forward the work of those who preceded us. It is now up to us to ensure that our retirement system is there to provide protection and retirement security for future generations.

“We are entitled because we worked for it.

“We are entitled because we sacrificed for it.

“We are entitled because we contributed to it.

“And we are entitled because the profits enjoyed by the railroad industry came from our blood and our sweat. Nobody gave us anything. We earned it. 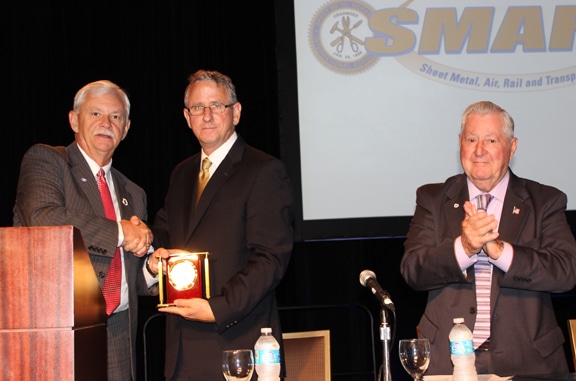