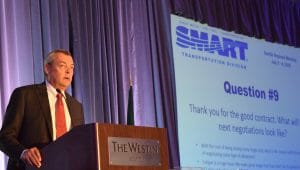 The Janus decision affects a handful of properties that have SMART TD representation, but leaves rail properties relatively unscathed for the time being, Previsich said.

“Our rail people, for the most part, don’t worry about it — yet,” he said. “The direct result of this decision will not directly affect anyone who works for BNSF, UP, CSX, NS, most of your short lines…”

Potentially one rail property and some bus properties could be affected by Janus, he said.

“Where we do have to worry is our operations that are operated by the public agency not under the Railway Labor Act — typically it’ll be a municipal bus company,” Previsich said. “We’ve had meetings with each and every property. They’ve already been contacted, they know what to do and we’ll go ahead and work our way through. ”

It’s those future attacks from anti-labor interests and court cases that we’ll have to be aware of in this era where all branches of government are stacked against labor, he said.

To fight back, union brothers and sisters, their friends, neighbors, families and others will need to vote and get the word out on issues important to the union, such as safety.

Also regarding politics, a member asked about how the viewpoints of members who are more conservative would be addressed.

“We welcome a free and honest dialogue and discussion about a number of issues,” Previsich said. “But the one thing that we need to do, that we’re going to do and what we are going to continue to do is to educate our members about our issues.”

Some members may have strong feelings on conservative issues, but those issues need to be balanced with the impact it will have on their livelihood and their families, he said.

“Not everybody is going to vote the way I would like them to vote, I understand that,” Previsich said. “But what I do want, and I think what we all want, is for those votes to be educated votes. We want the people casting the ballots to know what the issues are.”

Also ahead, is the start of negotiations for a new national rail contract, which is up in 2019, with a number of details to be determined.

Previsich said that the joint negotiating tactics by unions that were successful in the last contract will be repeated at least at the outset of the new talks as the carriers offer up their resistance.

“Going into those negotiations, there are some things you can count on,” he said. “Number 1, they won’t want to give us any more money; Number 2, they’re going to want to attack our healthcare … they’re going to go after our workers. That’s standard, that happens every time.”

The labor side is well aware of the breaks the carriers got with the Republican tax plan that was passed in late 2018, and that will definitely be in play during contract talks, Previsich said.

“Our job this time is to get a better deal than we got last time. That’s what we’re looking for — that’s what we’re always looking for,” he said. “They can’t hide behind finances. Not only do they have record revenues and record profits, it’s record tax cuts, record givebacks, record stock buybacks…the economics are going to work in our favor this time around.”

A Section 6 filing to signal the start of negotiation will be filed in the future, he said.

SMART TD also is improving its technological base, Previsich said.

“One of the things we are trying to do is leverage the technology in a way that is going to improve communications that we have,” Previsich said.

Questions were submitted by members using the upgraded and improved SMART TD app. It can be downloaded from the Apple App Store or through Google or by visiting www.smart-union.org/td/mobile.

Also ahead are upgrades from the decades-old legacy system to help improve how local secretaries and treasurers do their jobs with a rollout planned to begin in October with full implementation in January 2019.