In 1999, when the Navy abandoned the Concord Naval Weapons Station in California, it became a great opportunity zone for the Concord community to grow and flourish. As early as 2005, SM Local 104 had been involved in the city of Concord’s process to imagine and develop the future of the land. From attending community meetings to shape the vision of the site to speaking up in hearings in support of a local union workforce helping construct the 30-year buildout, hundreds of rank-and-file Local 104 members have had their voices heard. 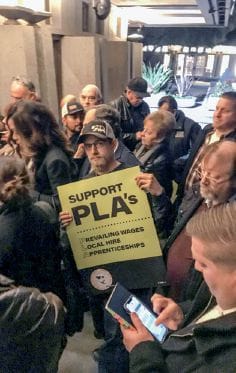 The site itself is on over 5,000 acres of land and will have over 13,000 new units of housing along with millions of square feet of commercial space. Over the last five years, Local 104 members have really stepped up their efforts and engaged in the political process in Concord. This includes helping elect local working family champions to city council, engaging in community cleanups and turning out at many community events. On January 20th, 2020, there was the biggest turn-out of Building Trades members in over a decade at a city council meeting anywhere in the Bay Area. With over 200 union construction workers, community allies and family members, members let Concord City Council know that a Project Labor Agreement was essential to meeting the needs of the Concord First Policy and ensuring that local workers and apprentices from joint-labor management programs would be hired on this project. This caused the original developer to walk away from the project, and with that, three new developers submitted proposals to the city for their vision of the project.
Most recently, as of August of this year, the Contra Costa County Building and Construction Trades Council secured a Project Labor Agreement with all three prospective developers. As Business Manager Rick Werner said, “This is a huge win and reflects the hard work our officers, staff and membership have put in to making this a reality. Once this project breaks ground, it will provide decades of work hundreds of our local members.”