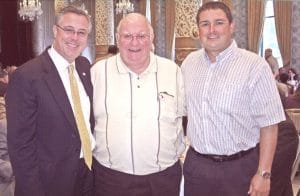 Brother Simmons was a catalyst for our union and a staunch protector of our members within the legislative arena. He served as mentor to me and my predecessor, Joe Szabo, and even while retired was active within politics and never afraid to pick up the phone to contact our office to offer up his guidance on many issues that were important to all of our members. Pat, to this day, is fondly remembered by those who worked with him at the Capitol in Springfield, he will be sorely missed.

Click here  for information on funeral services for Brother Simmons.