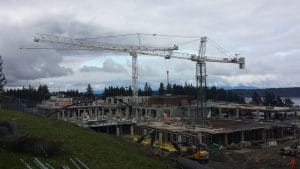 A new infrastructure package in Ontario will require contractors on large scale projects to hire apprentices and set up recruitment plans to hire economically disadvantaged workers from the community. It is the first law of its kind at the state or provincial level anywhere in North America. The new legislation also constructs framework for future Project Labor Agreements (PLAs)  on all large-scale infrastructure projects.

The set of groundbreaking new rules are part of a legislative package earmarking $130 billion for infrastructure over the coming decade.  SMART was a part of the coalition of labor and community groups that lobbied for these requirements, which will provide new work opportunities for journeymen and apprentices on Ontario projects.

While widely used in the United States, Project Labor Agreements are rare in Canada.  Also known as Community Benefit Agreements (CBAs) they were used on the construction of the Olympic Village in Vancouver and the revitalization of Toronto’s Regent Park. In both cases, they were used to help and make inroads into the fast growing and diverse neighborhoods in both of those two cities.