NLD Hynes: Contact Congress to have Rule of 2 included in Senate infrastructure bill

You’ve probably heard in the news over the past few days that the U.S. Senate has agreed on a new bipartisan infrastructure package. This article is to provide facts, highlight the ongoing differences between the House’s infrastructure bill and the Senate’s infrastructure bill, show where we stand and what can be done to step up as we fight for public and worker safety and for the Rule of 2 — a certified conductor and engineer in the cab of freight locomotives. 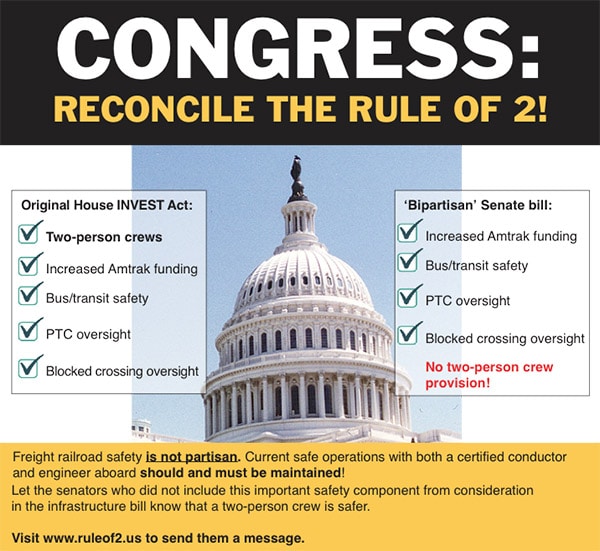 So what can you do to help?

We need to be loud and persistent. We need all of you to help. With the work being done right now in Washington D.C. on the legislative, and later this year, on the regulatory channel, now is the time to mobilize across the nation to step up and get the Rule of 2 across the finish line. Red state, blue state, purple state, north, south, east and west. We need to call. We need to email. Share the image above on social media. We need to explain to people in Congress, especially senators:

We have resources such as the LAC set up to message people. There are grassroots networks such as the Fight for Two Person Crews group on social media who can provide collective strength. We need to stand up and not be silent waiting for other people to do the work as we embark upon both the legislative and the regulatory paths to make the Rule of 2 the law of the land.

Keep in mind that second path — the regulatory one — to secure the Rule of 2 is via the Federal Railroad Administration where the agency would promulgate a rule establishing a minimum crew size. Under President Biden, FRA has announced that a reopening of examining a rule concerning crew size would be a priority of the agency this autumn as it attempts to fill the regulatory vacuum that was created under the prior administration.

More about that will be shared as time goes on, but we are farther along the legislative path than we ever have been. We need to use our collective voices to get our message out to Congress.

Let’s continue to persist, step up, go forward and get the word out to Congress. Please get in touch with your senators and talk about the Rule of 2.