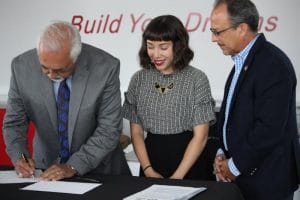 SMART with the help of Jobs to Move America (JMA), signed a landmark community benefits agreement with BYD Motors that will create pathways into the manufacturing industry for underrepresented and underserved populations in Los Angeles County.

Community Benefits Agreements are commonly associated with real estate projects, but through JMA’s work, are becoming a gold standard for communities seeking returns on their investment in new infrastructure projects. The CBA between JMA and BYD is a legally enforceable agreement that will support the creation of a robust U.S. jobs program through deep investments in pre-apprenticeship and training programs. BYD has committed to a goal of recruiting and hiring 40 percent of its workers from populations facing significant barriers to employment, such as veterans and returning citizens. In addition, populations that have historically been excluded from the manufacturing industry, such as women and African Americans will be also be recruited and placed.

The agreement comes weeks after a successful “card-check” vote at the BYD factory in Lancaster, California, at which the employees voted to recognize SMART Sheet Metal Local 105 (Los Angeles Metro Area) as their official bargaining unit. “BYD is the only electric bus manufacturer with a workforce represented by a union, meaning workers will have a seat at the negotiating table around their wages, benefits, and working conditions. Now, as the only electric bus manufacturer with a bona fide Community Benefits Agreement, community will also have a seat at the table to make sure the county’s most struggling populations have a pathway into the middle class,” said Luther Medina, President/Business Manager of SMART Local 105.

BYD, the JMA coalition, SMART International, and SMART Local 105 will jointly create training and apprenticeship programs for workers in the electric bus manufacturing and assembly industry.  Technical training will consist of classroom and hands-on training in basic skills, precision metal work, electrical wiring and assembly of complex mechanical and electrical systems, among other skills.  BYD, the JMA coalition and SMART Local 105 will collaborate to develop a customized, pre-apprenticeship program that will help ensure the success of all workers, particularly disadvantaged workers, gearing them towards preparation of employment at BYD. The training will include life skills, language and mathematical literacy, and soft skills.