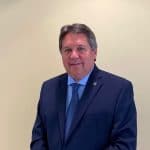 In 2018, Mike was also appointed as a member of the National Joint Adjustment Board (NJAB) and has also served on many committees for the International. In 2019, Mike was appointed to the Executive Board of Building Advantage. Building Advantage is a Labor Management council that promotes union construction in Southeastern Wisconsin. The Building Advantage Executive Board is made up of six labor and six management representatives, along with six industry advisors solving issues of mutual concern, promote use of union construction and recruitment of the future workforce.