Masino Appointed to Pennsylvania Board 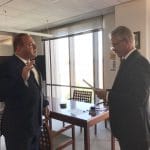 Local 19 President and Business Manager Gary Masino was sworn in to serve a four year term on the Pennsylvania Economic Development Finance Authority Board. He was appointed by Governor Wolf and then after an extensive vetting process, unanimously approved by the Pennsylvania State Senate.

“President Masino has stated that he is excited to begin his tenure on this board and looks forward to taking part in the process of creating jobs for Local 19 members and working people throughout the region. ”

This is truly an honor for Local 19 and President Masino to serve on this board that focusing on stimulating growth through the funding of construction projects throughout the Commonwealth.