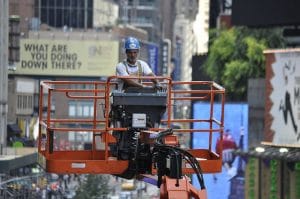 Members of Sheet Metal Local 137 in New York City are known for their expertise when it comes to keeping the city lit up—dazzling generations of tourists and New Yorkers with the Big Apple’s bright lights and giant billboards. Now they can add another notch to their belt with what may be the world’s largest video display, built in the heart of Times Square (aka the crossroads of the World) at the Marriott Marquis Hotel on the corner of Broadway and 45th Street.

The project, requiring in excess of 20 members working non-stop through the better part of 2014, required the old staging and steel to be replaced with the new gigantic video display measuring over 25,600 square feet (77.69 feet high x 329.65 feet wide). Once complete, the sign will adorn the façade of the hotel with the types of messages and advertisements found throughout the rest of Times Square.

Local 137 signatory North Shore Neon Sign, Inc. is the contractor on the project. Their motto “We Hang to Live” is a tongue and cheek take on the company’s 50-year tradition of designing and hanging signs for customers in Times Square and all across the New York metropolitan area—all of which has been done in partnership with the men and women of Local 137. According to Local 137 Business Manager Dante Dano, “If you are a contractor or business who wants to break records and stand out from the crowd, you need to surround yourself with extraordinary people. That’s what these members are. Once again, they make me proud to represent them.”

Allan Anderson, Local 137’s Vice President, has been the foreman on the Marriott Marquis Hotel job since the beginning. According to Anderson, “If it were not for the skilled craftspeople in our steel shop and sheet metal shops, the installers would not have had product to install. It was the biggest installation of a single screen I have been involved with in my career. And I am very proud of all my brothers and sisters involved with this project.”

The New York sign industry is currently undergoing a revitalization with the upsurge in the U.S. economy, bringing tourism and advertising dollars back to the city. The first tenant in the World Trade Center, Condé Nast, has already moved in, and members of Local 137 were there to install the signs and visual displays for the publishing company. Brookfield Properties, a major worldwide developer with billions of dollars of new development in New York City, recently signed a 20-year agreement to install signs on all their New York area properties with the help of Local 137 members.

Local 137 members are known for one more thing as well. Every year, millions of Americans across the country and in Times Square ring in the New Year by watching the New Year’s Ball lowered in Times Square. The next time you watch it, remember that the people behind the design, fabrication, installation, and operation of the Times Square Ball are none other than your brothers and sisters from Local 137.