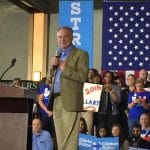 Fresh from the vice presidential debate, Democratic candidate and Virginia senator Tim Kaine spoke at a rally at Local 19 in Philadelphia where he spoke about his and Hillary Clinton’s economic vision for America.

Speaking about Donald Trump’s possible failure to pay taxes like other Americans, Kaine noted that it  “makes me very, very angry” since he knows first-hand with his own son currently serving in the Marine Corps the sacrifices that American troops make and the support Trump denies them.
Referring to the $916 million loss Trump claimed on his 1995 taxes, Kaine noted “I guess it takes a lot of genius to lose a billion dollars.”  He asked if “this is the kind of genius you want running the whole American economy? You got to be kidding me.”

Motivating the standing room only crowd of union members and Philadelphia activists, the son of a union iron worker reflected that “It’s close. Just eight days ago it was even. It looks pretty good now, but I’m not sure what’s going to happen in the next eight days.”

“In every election, I put this thought in the back of my head — that I’m the underdog until I win it,” Kaine said. “That’s how you have to run every race.”