The endorsement came at the organization’s 41st annual Constitutional Convention in Rosemont, Ill.

Citing issues ranging from chronic crew-member fatigue to inadequate crew training to accident prevention and response, the state labor council’s 15-point, two-page document called on the Illinois congressional delegation to vote in favor of House Resolution 3040, the Safe Freight Act, which would require all freight trains in the U.S. to have at least two certified crew members aboard.

The AFL-CIO resolution, submitted by SMART-TD Illinois State Legislative Director Robert W. Guy, charged that community safety is endangered by single-person train operation because the lone employee on board can become overwhelmed with multiple tasks and deadlines while trying to control a heavy train that cannot respond easily to braking commands.

“Railroad operating requirements, and in many cases operating rules themselves, require train crews to perform numerous tasks while concurrently operating moving trains, which the National Transportation Safety Board has labeled ‘task saturation,’” the resolution said.

The AFL-CIO document said overwhelmed crew members could overlook “specific requirements related to the safe operation of a train” and require a second crew member so that a “check-and-balance” system is in place to make sure nobody misses a signal, an instruction or a routine safety practice.

The resolution noted an elusive fact often missing from media accounts of the train-crew issue: the carriers’ current crew-recruitment and training practices often end up rushing freshly trained crew members into very challenging operating environments without the “seasoning” provided by older veterans who have “seen it all” and developed the responses to master even the most sudden and unexpected challenges.

“The general public and the media do not understand how ‘raw’ a new employee can be when challenged with an unexpected situation while trying to control a moving train,” Guy said.

“Currently, new employees operate in the same cab with an older employee who has an appropriate, experienced response to virtually any emergency,” Guy said. “A new employee operating alone in the cab would not have access to that unique resource.”

Guy said there’s really no substitute for the “old heads.”

“These veteran railroaders are walking encyclopedias of danger and walking manuals of safe practices, and there’s no training program that effectively passes on all of their intricate, intimate, milepost-by-milepost experience to new recruits,” Guy said.

Guy said if the veterans are not in the cab, there’s no way to access their experience in an emergency.

“Company training programs, for the most part, do a very good job of making sure new employees grasp the general principles of operating trains, but only a veteran employee can transmit the specifics associated with each operating territory and come up with the right response when an emergency develops,” he said.

The resolution noted that the need for a second crew member persists because railroads continue to delay addressing the problem of long workdays, irregular assignments and working hours, lost sleep, chronic fatigue and the anxiety associated with maintaining an orderly family and personal life while always “on call.”

The document also cited the railroads “…intentional manipulation of manpower…to maximize profits at the expense of public and employee safety, often times requiring crew members to return to work immediately after the federally mandated minimum rest period has expired.”

“It’s a wonderful feeling to know that the entire Illinois labor movement is behind SMART-TD in its effort to protect railroaders and the public from the dangerous effects of a one-person crew regime,” Guy said.

“All of us are grateful to our brothers and sisters in labor for standing with our members and their families, and the communities in which they live, on what literally could be a life-or-death issue.” 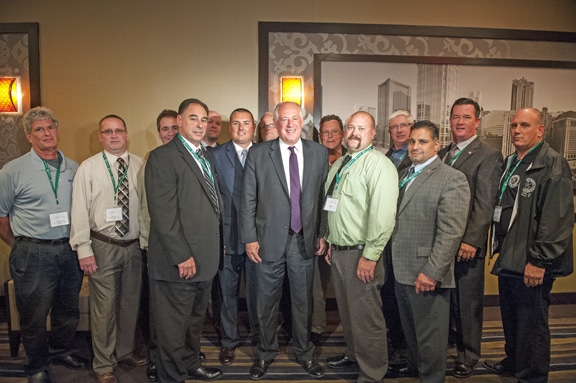