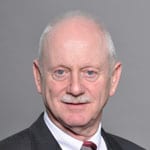 Kim Thompson, general secretary & treasurer of the UTU International and the UTU Insurance Association since 2008, will retire Dec. 31.

The UTU Board of Directors has elected International Vice President Delbert Strunk to succeed Thompson Jan. 1. Strunk will retain his position as an International vice president.

Also, International Vice President Paul Tibbit will retire Dec. 1, but the UTU board has not yet elected a successor.

UTU International President Mike Futhey praised Thompson as “one of the most dedicated union officers I have had the honor and privilege to work with. Kim’s stewardship of UTU and UTUIA finances is a principal reason both organizations have meaningfully improved their bottom lines in spite of this lengthy economic downturn.

“Delbert Strunk is one of the most loyal and hardworking of International officers,” Futhey said. “His experience at all levels and facets of this organization will ensure a seamless transition.

“The retirement of Paul Tibbit will be felt throughout the UTU, as his assistance to general committees in negotiating contracts and successfully pursuing grievances has earned him deep respect from all who have benefited from his expertise and advice,” Futhey said.

Thompson, who will be 65 in January, began his railroad career in 1966 as a brakeman on the Moberly Division of the former Wabash Railway (later merged into Norfolk & Western, and now part of Norfolk Southern). He was promoted to conductor in 1972 following four years of U.S. Navy service.

In 1975, Thompson was elected president and chairperson of Local 226, Moberly, Mo., representing conductors, brakemen and yardmen, and was elected by his local as a delegate to two UTU conventions. He was elected legislative representative of his local in 1976.

In 1985, Thompson was elected a full-time vice general chairperson (GO 719, merged in 1998 into GO 687), and elected general chairperson of GO 719 in 1989, representing conductors, brakemen, yardmen, firemen and engineers on the former Wabash lines of Norfolk Southern.

He served as vice president until he was elected general secretary & treasurer at the UTU International convention in 2007. He took office Oct. 1, 2007, upon the retirement of GS&T Dan Johnson.

From 1988 through 1997, Thompson served on the board of the Wabash Memorial Hospital Association in Decatur, Ill.

“My impending retirement comes with mixed feelings,” Thompson said. “There is always another task to do. There is always someone in need of help. But I have learned that there is someone to step up as I once did and the time comes for them, just as it did for me.

“I am indebted to Jim Oliver, former Local 881, Montpelier, Ohio, a vice general chairperson who taught me that preparation fosters success. I am also thankful for Tom DuBose, who taught me to take care of business and the rest will take care of itself. And I will forever be thankful to Mike Futhey for his leadership through the most challenging time faced by this organization.

“I am thankful for the love and support of my bride, Connie, and her sacrifices in following my dream and I look forward to our time being ours.”

Thompson and his wife, Connie, have five children and five grandchildren. 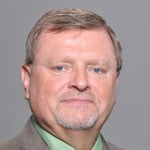 Strunk, 62, began his career in 1973 as a brakeman on the Cleveland Division of New York, Chicago & St. Louis (Nickel Plate, which later merged into Norfolk & Western and is now part of Norfolk Southern.) He was promoted to conductor in 1977.

Strunk has been appointed to the last three UTU national negotiating committees, as well as appointed to the National Wage and Rules Panel. He served as chairperson of the 2007 UTU Constitution Committee and is a member of the UTU Board of Directors. 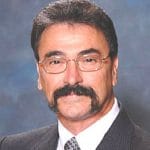