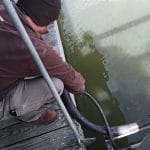 Under the banner of the Union Sportsmen’s Alliance (USA) Work Boots on the Ground program, members of the Columbus Metal Trades Council (CMTC) volunteered their time and skills on Saturday, Feb. 21, to inspect six boat docks and 66 boat slips at Florence Marina State Park for electrical hazards and make needed repairs, saving the park $1,500 to $2,000.

Launched in 2010, Work Boots on the Ground brings together union members willing to volunteer their time and expertise to projects that conserve wildlife habitat, educate future generations of sportsmen and women, improve public access to the outdoors or restore America’s parks.  Sitting at the northern end of 45,000-acre Lake Walter F. George in Omaha, GA, Florence Marina State Park is popular among a variety of outdoor enthusiasts, especially anglers and boaters.  As with most state parks, it is managed with a tight budget.

“If there were any exposed wires or other electrical issues, and a renter or guest slipped into the water, it could cause serious bodily injury.  The inspection helps prevent hazards and minimize risks,” said Tracy Yearta, park manager of Florence Marina State Park and Providence Canyon State Park.  “Lots of these projects have to be funded by the department and, with funding the way it is, it’s very critical to bring in outside resources.  Their [CMTC volunteers] skills and leadership ability is exactly what we need.”

According to Hall, “Everybody was happy doing it…there was a sense of pride in knowing that we helped out the local community.  The very next month at our meeting, everybody was exciting, smiling, happy.  Some of the same volunteers wanted to do another project.”

This summer and fall, the volunteers will renovate Florence Marina State Park’s waste water treatment facility and install additional campsites at the park.