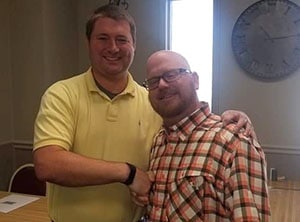 “T.K. was a great man. He was a deeply devoted family man, who unconditionally loved his wife, Kim; his sons, Copelan, Jonathan, and Justin; his daughters, Dailyn and Kaylee; and his mother, Jeannie,” Wier said. “T.K. was a strong-willed union representative, and he always put the best interest of the membership at the forefront. T.K.’s legacy as a strong labor advocate, a dedicated family man and a caring and compassionate person will carry on. He will be sorely missed. T.K.’s tragic passing is both devastating and difficult to comprehend.”

A celebration of Brother Vanwinkle’s life will begin at 1 p.m. at the First Baptist Church, 1111 E Hwy 50 in O’Fallon, Ill., with Rev. Skip Leininger officiating.

SMART-TD offers its sincere condolences to Brother Vanwinkle’s family and to all who knew him.

His full obituary can be read here.