Federal Railroad Administrator Joseph C. Szabo spoke to attendees at the First Transportation Division Convention of the International Association of the Sheet Metal, Air, Rail and Transportation Workers in San Diego, Calif., July 1, 2014. His speech, as prepared, is below.

Good morning, everyone. It is great to be here with you today.

I am joined by Bob Lauby, FRA’s Chief Safety Officer, and Mike Lange, our chief track inspector here in California. I’d like to acknowledge all of our inspectors at FRA for the tremendous job they do every day to keep all of you safe, and to achieve higher levels of safety.

I know I say this every time I see you all of you: But five years into this job, I still am incredibly humbled to be the first FRA Administrator to have come out of the ranks of rail labor.

A while back, I was looking at some old safety statistics from 1967, the year the Federal Railroad Administration was formed. And what I saw – back then in 1967 – a rail worker was killed on the job nearly every other day.

Think about that: nearly one employee on-duty fatality every other day.

People with families. People who worked hard every day to move this nation’s freight and economy, and get travelers to jobs and other places. People like us – one of them not going home every other day.

And, if you think about it, at that time there were no guarantees that this industry, and these jobs, would continue being there in the future.

When I hired out in 1976, one-third of the nation’s railroads were in bankruptcy; one- third were on the edge of bankruptcy; and the remaining third were barely making a profit.

Conditions were so bad, we had standing derailments. The tracks would simply give out beneath cars sitting in the yard.

While on-duty injuries and fatalities continued to occur at a frightening pace, rail was a dying mode: rapidly losing freight to trucks and passengers to air and auto.

Thankfully, this great union has always lived by the motto that working men and women – when united together – have great power to make positive change.

Rail workers have fought through difficult conditions, and through years when funding for Amtrak and commuter rail was threatened to be cut, if not outright eliminated.

And an industry has emerged from that struggle that is now uniquely positioned to help our transportation system move more people and more goods as we grapple with climate change – an industry that is stronger and is safer.

In 2013, the number of rail workers killed on the job – instead of one every other day – was down to approximately one a month. Still too many, but a remarkable improvement.

And so far in 2014 we’ve only had two fatalities in the first six months. Yet again, remarkable improvement.

Train accidents have decreased to new lows for five straight fiscal years now, part of a nearly 50 percent reduction since Fiscal Year 2004. During that time, employee fatalities have declined by 59 percent.

Amtrak is now the nation’s fastest-growing major travel mode, with ridership records set in 10 out of the last 11 years.

And the freight rail industry is now in a better position than ever to meet the nation’s growing transportation needs.

And, while record investments have been made in passenger rail during this Administration, we have yet to succeed in our goal of securing predictable, dedicated rail funding: the resources we need for rail to achieve parity with other modes of transportation.

As we look towards the year 2050, we know freight railroads are going to play a growing role in moving more than 4 billion more tons of freight across the network, and a much greater role in meeting this nation energy’s needs.

So we have to work harder than ever to create a framework that will ensure these goods move safely, reliably and efficiently. We have to drive continuous safety improvement, protect communities, and see that every railroader goes home safely.

This is what President Obama, Secretary Foxx, and I are all fighting for.

And that is why we recently sent to Congress a bill that will tackle these challenge.

It is called the GROW AMERICA Act.

As the title implies, the GROW AMERICA Act will grow federal investments in all surface transportation modes – including rail – and it will advance safety.

For all of you, that means a safe workplace, and job growth.

GROW AMERICA will provide FRA with $19 billion in funding to advance a high- performing freight and passenger rail network and advance rail safety.

But it does even more.

For the first time ever, rail will achieve predictable, dedicated funding – like all other transportation modes – and allow it to grow as a safe, cost-effective, environmentally friendly, and efficient way to move people and goods.

Let me talk about the rail development side of our proposal.

GROW AMERICA will invest in both a Current Passenger Rail Service Program – meeting Amtrak’s needs – and a Rail Service Improvement Program to allow the system to grow.

The Current Passenger Rail program will fully fund Amtrak: ensuring a state of good repair system-wide, replacing obsolete equipment, and bringing stations into compliance with the Americans with Disabilities Act.

To continue the development of a high-performing passenger rail network, the Rail Service Development Program will provide grants to build new corridors – with service levels and speeds targeted to the market – improve existing corridors, and address chokepoints that delay passenger services.

To enhance safety, communities will be eligible for grant funding for projects such as rail-line relocation efforts, and grade-crossing improvements, and projects that seal off corridors by building over-passes and underpasses – things that create a safer operating environment.

And GROW AMERICA will enable us to both improve and expand rail options while driving continuous safety improvement.

New records in safety have not been achieved by mistake. They are due largely to railroad workers’ individual and collective commitment to safety – and to the success of FRA’s data-based oversight and enforcement program.

But human error continues to be our most vulnerable safety area, contributing to nearly 40 percent of accidents last fiscal year.

And there are limits to what our data-driven oversight and enforcement program can achieve. This was proven by the series of accidents on Metro-North and the tragedy with the crude oil train in Quebec.

In neither case did the data indicate an imminent tragedy.

This means we need to continue to empower you to undertake honest yet non-punitive assessments of human factors – the goal being to truly understand root causation.

Ultimately, these proactive approaches to safety, overlaid above our traditional oversight and enforcement program, is how we’ll reach the next generation of safety.

And GROW AMERICA supports this evolution.

For one, our proposal calls for a nationwide rollout of the Confidential Close Call Reporting System: a partnership between FRA, labor, and the carriers that our Risk Reduction Program Division has been testing through a series of pilot projects.

It allows us to learn from mistakes that were close calls instead of accidents – and take corrective actions before any harm occurs.

It is an important turn away from the old culture of waiting for an accident to happen, then punishing an employee for being human.

So far, our pilot projects have had remarkable results, including a 70 percent reduction in certain types of accidents and a 90 recent reduction in discipline. Just as important, it has developed a positive and proactive safety culture.

And – critically – it will give us authority to establish new hours-of-service regulations that are based on fatigue science.

That way, we can address what all of us know is the root cause of fatigue for over-the- road freight train crews: those unpredictable work schedules.

The time for meaningful action, to prevent work fatigue, and to require more predictable work schedules, is now.

There are two others areas of safety I want to talk about that are not covered by the GROW AMERICA Act, but that are very important.

The NTSB has made multiple recommendations regarding the use of inward- and outward-facing cameras in controlling locomotives.

And we recently asked the Railroad Safety Advisory Committee – which your union is a part of – to develop standards that ensure these devices are used to enhance safety and not as a tool to discriminate or violate employee privacy.

I know what can happen every day out on there on the property. I’ve been that union officer who was subject to “special attention” by an overly aggressive supervisor. I’ve walked in those shoes.

So I’ll repeat what I said to the committee, which is: we owe it to everyone – the public and rail workers – to get this right. And I know we can.

Some of you are involved in the transport of significantly higher volumes of crude oil.

In partnership with the Pipeline and Hazardous Materials Safety Administration, or PHMSA, FRA is examining the entire system for the safe delivery of crude oil.

There is not one silver bullet to solve this complex problem. It requires a comprehensive approach to evaluate risk and develop effective strategies to mitigate that risk.

As part of that, it is a fundamental premise of safety – and a tenet of the design of fail- safe systems – to never allow a single point of failure.

Safety science speaks repeatedly to the need for appropriate redundancy.

As you know, after the accident in Lac Megantic, Canada, we called the Railroad Safety Advisory Committee together for discussion on the subject of single-person crews.

But the Secretary made clear to me — the working group would either reach consensus by April 1, or FRA was to use its authority to move forward with a regulation on its own.

As you know, after six months of deliberations, the RSAC did not reach a consensus on this issue. But, as expected, we learned a great deal from the stakeholders.

The point I’m trying to make is, we understand the challenges, opportunities and potential effects of regulations – and have a responsibility to all parties to get this right.

It cannot be about job preservation, but must be solely driven by ensuring safety.

This union has supported its members and helped to build a safer, stronger industry. The next generation of railroaders – in many ways – will have you to thank.

And I think, the next generation of railroaders, looking back on this time, will say: “this is when we changed the conversation.”

Five years ago, there was no passenger rail development program, and we were just beginning to move forward with Rail Safety Improvement Act mandates that are now starting to lead an evolution in railroad safety culture.

But rail still has yet to achieve funding parity with other modes. And regarding safety, the loss of even one rail worker is just one too many.

The ideas we are fighting for in GROW AMERICA will move us forward. This is where we go beyond changing the conversation to changing history.

So I need all of you to get involved in this issue.

I need you raising your voices in unison – through your union – to let Congress know what this could mean for rail safety, for our nation’s economy, and for jobs.

So, look out for each other out there. Take no shortcuts in your duties and continue to be engaged in peer-to-peer efforts like SOFA and Confidential Close Calls reporting.

As we grow the role rail will play in moving people and goods, you have the power to continue to raise the professionalism of this industry; to ensure dignity and respect for craft employees by supporting a culture change in this industry; and, to create a safer operating environment.

And if Congress supports GROW AMERICA – together – that’s exactly what we’ll do. Thanks so much. 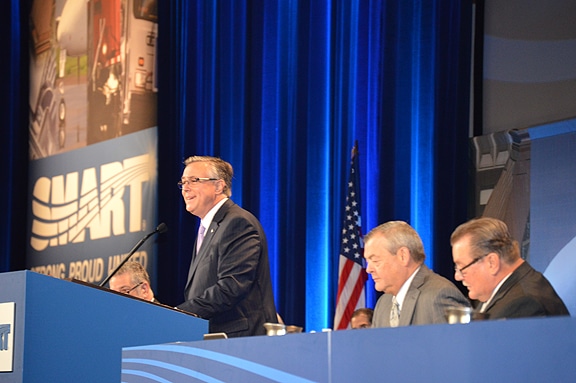