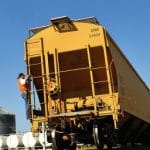 WASHINGTON – Responding to petitions for reconsideration to its Nov. 9, 2011, final rule on conductor certification, the FRA has delayed for six months the testing implementation dates and clarified other mandates affecting territorial qualifications and the definition of hostlers.

The FRA, in a Feb. 8 Federal Register notice, said that because its final rule was published Nov. 9, 2011, six months later than contemplated, carriers were not permitted sufficient time to formulate training programs and have them approved by the FRA in time for testing to begin March 1, 2012.

* By Sept. 1, 2012 (rather than March 1, 2012), each railroad (other than Class III) shall designate as “certified conductors” all persons authorized by the railroad to perform the duties of a conductor as of Jan. 1, 2012; and issue them certificates of certification.

* After Sept. 1, 2012, each railroad (other than Class III) shall designate as a “certified conductor” those authorized by the railroad to perform the duties of a conductor subsequent to Jan. 1, 2012, upon successful completion of testing, training and evaluation.

* After Dec. 1, no Class I or Class II railroad, Amtrak or railroad providing commuter service shall initially certify or recertify a conductor unless that conductor has been tested and evaluated. For Class III railroads, that date is April 1, 2013.

* No later than March 31 of each year (beginning in calendar year 2014), all railroads other than Class III railroads, shall conduct a formal annual review and analysis concerning the administration of its program for responding to detected instances of poor safety conduct by “certified conductors” during the prior calendar year.

* For a conductor who has never been qualified on main track physical characteristics of the territory over which the conductor is to serve, the assistant shall be a “certified conductor” who is not an assigned crew member.

* For a conductor who previously qualified on main track physical characteristics of the territory over which the conductor is to serve, and whose qualification has been expired for one year or less, but who has not regularly traversed the territory prior to the expiration of the qualification, or a conductor whose territorial qualification on main track has been expired for more than a year, the assistant may be any person, including the assigned crewmember other than the locomotive engineer, so long as the serving assistant would not conflict with that crewmember’s other safety sensitive duties and who meets the territorial qualification requirements for main track physical characteristics.

* As for qualification, and since territories differ in their complexity, railroads will be given discretion to determine how many times a conductor must pass over a territory to be considered to have regularly traversed a territory.

* Each of these territorial qualification issues will be included in each railroad’s plan filed with the FRA and will contain the input from general chairpersons.

Theproposed new minimum training standards for those in in safety sensitive positions, announced by the FRA in aFeb. 7 Notice of Proposed Rulemaking (see link, below), will also apply to conductor certification training programs. “With many thousands of new employee coming on board in the near future, the new training standards will help provide adequate training,” said UTU National Legislative Director James Stem.

Click here to read the changes to conductor certification as published Feb. 8 in the Federal Register.

Click on the following link to read the proposed new minimum training standards for those in safety sensitive positions (that will also apply to conductor certification training):

Click on the following link to read about the Nov. 9, 2011, final rule on conductor certification: