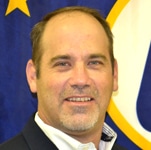 Adams was appointed alternate to the executive board by the board of directors in 2o12. A member of Local 331 at Temple, Texas, he also serves as BNSF GO 393 general chairperson and local delegate.

Burkle is a member of Local 1137 at Fargo, N.D. She had previously served as North Dakota state legislative director and local chairperson and remains Local 1137’s legislative rep. and delegate.

“I look forward to working with each of our new officers and thank them for their commitment to serving their fellow brothers and sisters of SMART. I am sure will all be assets to this administration,” Previsich said.