For several months, 18-year-old Dockter worked as a brakeman alongside engineers who helped her understand railroading, including Ray Schlosser, Franky Hoffman and Bill Stumpf. They encouraged her to become an engineer as well.

“As Bill said, ‘Opportunity only knocks once,'” Dockter said. “So I decided yes.”

Read more from The Bismarck Tribune.

Ramona Dockter was a member of UTU Local 1344 (Mandan, N.D.) during her time as an engineer, before she left the industry. Franky Hoffman was also a member of Local 1344 before his retirement. 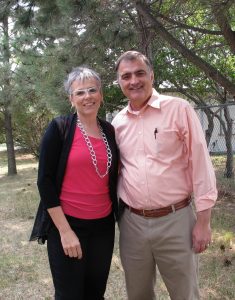