Faces of the Unemployed: Coby Messier 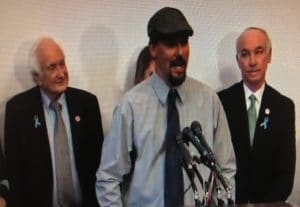 Coby Messier was employed as a sheet metal worker for over a decade before being laid off in May 2012.  A Local 49 member, he began collecting unemployment insurance while he looked for work and was able to find another job in September of that year.  Unfortunately, he was laid off once again in February 2013 due to a lack of available work and went on unemployment insurance to help make ends meet during his job search. On December 28, 2013, however, he was cut off from that vital economic lifeline when Congress failed to renew the program. Since then, his family has struggled to live on the salary of his wife, who serves as a public school teacher. Coby has been trying to start his own business, but that has been made more difficult since losing his unemployment insurance.

Brother Messier of Albuquerque was a guest of Congresswoman Lujan Grisham’s to President Obama’s State of the Union Address.

“The House of Representatives has taken 25 roll call votes since emergency unemployment insurance expired on December 28 of last year. Sadly, not a single one of those votes has been to restore this vital economic lifeline to the nearly 7,500 New Mexico jobseekers who have been left out in the cold,” Rep. Lujan Grisham said. “Every day that Congress fails to renew unemployment insurance, it harms more and more Americans just like my guest, Coby Messier – people who, in addition to fighting to find a job, now have to fight just to keep a roof over their head, feed their family and pay their bills. It’s long past time for Congress to stop putting New Mexico families in peril and do what’s right for our constituents, our communities and our economy.”

“I am honored that Congresswoman Lujan Grisham has invited me to attend the State of the Union Address on behalf of the nearly 7,500 New Mexico jobseekers who have lost their emergency unemployment insurance,” Mr. Messier said. “I want to thank Congresswoman Lujan Grisham for continuing to call for action on this important issue and for her tireless commitment to helping New Mexico families.”