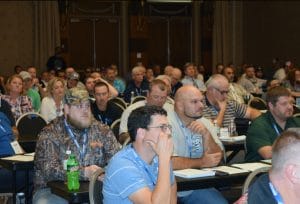 Each year the SMART TD holds two regional meetings; one in the east and one in the west. The theme for the 2015 meetings was, “Your Union-Your Future; Training the Leaders of Tomorrow.” The theme references the future, since what our members learn today will ultimately determine the caliber of our leaders tomorrow.

Education is the goal of the meetings. Attendees are educated on a variety of functions performed by the union on behalf of all members. This are also an opportunity for elected union representatives to hone their skills. Whether someone is a Local President, Secretary, Treasurer, Trustee, Legislative Representative, Chairperson or simply a proactive member, all who attend return home with knowledge and experience that they can grow from. The meetings also promote face-to-face contact amongst the membership. Members are able to match names to faces, shake hands, build and strengthen bonds, and enhance fellowship and camaraderie amongst their union brothers and sisters.

The western regional meeting was held at the Arizona Biltmore in Phoenix from June 29 through July 1. The eastern regional meeting was held at the Rhode Island Convention Center in Providence, RI, July 13 through July 15. Attendees at both meetings took full advantage of the educational opportunities offered in the workshops and presentations by dignitaries.  Workshop topics pertained to issues that affect all facets of the Transportation Division membership including rail, bus and airline workers.

The TD Designated Legal Counsel (DLC) historically has been a major force in providing educational workshops to members and this year was no exception. The DLC presented several workshops on a variety of important topics including general laws affecting railroad employees, Federal Employers’ Liability Act (FELA), and working with FELA attorneys. Coordinator of DLC Steve Young, who is retiring, presented to standing-room-only crowds his invaluable workshops for the last time. His presentations included a “Nuts & Bolts Rail Workshop”, “No Rules Rail Workshops” and “The Railway Labor Act Workshop”. For his many years of service to the union, Young was lauded on the last day of the meeting in Providence.

A variety of other workshops were available to the membership including organizing, bus steward training, and bus grievance and arbitration. Local Secretary and Treasurers were provided workshops on the “Dos and Don’ts”, “Paying and Reporting Taxes”, “One-on-One”, and “Working the Billing”.

In the Live Arbitration Workshop, presented by Arbitrator Sidney Moreland and BNSF’s Melissa Beasley, a mock arbitration proceeding unfolded before the attendees’ eyes. This simulation allowed the members to experience, first hand, exactly what occurs during arbitration hearings to help prepare them for it.

Various other informative workshops were presented, including several by the Auxiliary of the UTU and a UTUIA workshop on Insurance training for LIRs and field supervisors.

The ability of members to provide instantaneous evaluations on the workshops they attended was enhanced by the unveiling of the new SMART TD mobile application in Phoenix. Developed by the IT Department in the Cleveland office, it allows members to stay connected to their union. Information about meetings, workshops and links to relevant union information is made readily available and further enhancements are under development. The evaluations received through this new app are already being used to plan new workshops and to improve future regional meetings.

Charitable causes and fraternalism were also in full operation at the regional meetings. Phoenix and Providence families in need were provided support through 50/50 raffles held for the benefit of the Ronald McDonald House in each of these two cities, respectively.

Also, Thomas J. Schmitt of TD Local 1974 was chosen as the 2015 UTUIA Volunteer of the Year as a result of his charitable work with Operation Lifesaver. He is an Operation Lifesaver authorized volunteer who travels the country giving presentations to schools, organizations, bus drivers, truck drivers, first responders and fire fighters. Last year he was the top presenter for the KCS Railway as well as in the state of Louisiana. He gave 148 presentations in 2014, a personal best for Schmitt. For his selfless commitment to volunteering for Operation Lifesaver, Schmitt received a $1,000 U.S. Savings Bond and a plaque of appreciation from UTUIA.