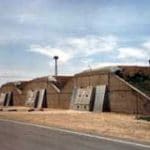 A bunker used for temporary staging of nuclear material.

The MTC struck after more than seven months of bargaining when, on August 28, CNS-Pantex presented its “best, last and final” offer. At that time, 87 percent of the Texas workforce voted to strike the Amarillo facility.

In addition to the benefits package, the tentative agreement also gives employees annual wage increases of two percent. MTC represented employees will vote on the proposed agreement on Sunday, October 4.