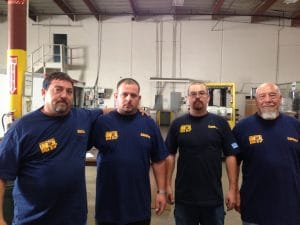 Custom-Bilt Metals is a manufacturer of metal roofing panels, gutters and downspouts. Unemployed Sheet Metal Local 105 member Jonathan Ruiz sought employment at Custom-Bilt Metals under Local 105’s salting program. Brother Ruiz realized that the workers were not satisfied with their current working conditions and began talking to the workers about how they could better their working conditions if they collectively formed a union. During this time, Brother Ruiz was in constant contact with Local 105 Organizer Ryan Collins, who helped facilitate a series of meetings between the workers at Custom-Bilt and organizers from the local.

Collins was joined by SMART International Organizer Manny Gonzalez, who held weekly meetings with the workers from Custom-Bilt Metals to discuss forming a union at their workplace. The workers explained their struggles to the organizers, stating that they were unable to make any progress on their own with the company. Together, they decided to try forming a union through SMART.

In mid-September Collins and Gonzalez presented the company’s manager with a recognition demand letter. The company declined. An election petition was then immediately filed with the National Labor Relations Board.

Between the filing of the NLRB petition and reaching a stipulated agreement for an election date, the company hired a union-busting firm and legal representation. The employees were bombarded with anti-union hand bills, captive audience meetings, and one-on-one meetings with the union busters. The company attorney even classified an employee as a supervisor and then proceeded to stack the deck against the vote by adding two anti-union secretaries to the bargaining unit.

The union agreed to these terms with the NLRB, knowing that they still had a solid majority of votes. The company’s strategy was to delay the election date until January or February 2015. On October 29, 2014, the employees sent a clear message to the company that although the company tried to stack the deck against the workers and forced them to endure the propaganda the union busters had presented them, the majority of the workers still want to be represented and voted for SMART.

Since the workers’ union win, the company has eliminated one union supporter’s position, with no other work available. An amicable severance package was negotiated on behalf of the employee. Both parties are now in negotiations, and we will keep members informed as to the status of those negotiations as they develop.