Local Chairperson Harry J. Garvin Jr. reports that the local’s 2013 monthly meetings will be held at Ozzie’s Diner at 7780 E. Slauson Ave. in Los Angeles off 5 FWY between 710 FWY and 605 FWY. The diner’s telephone number is (323) 726-0300. Meetings will be held the second Wednesday of each month at 1 p.m. during odd-numbered months and at 7 p.m. during even-numbered months.

Members of this BNSF local again voted to make a generous food donation to the Salvation Army branches in Hannibal, Quincy, Ill., and Keokuk, Iowa, Secretary & Treasurer Buddy Strieker reports. “We would like to thank the membership of Local 219 for voting to help the less fortunate in our communities so everyone could have a nice dinner during the holidays,” Strieker said. “We were able to purchase 2,600 pounds of food for distribution at the Salvation Army.” 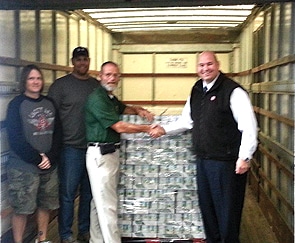 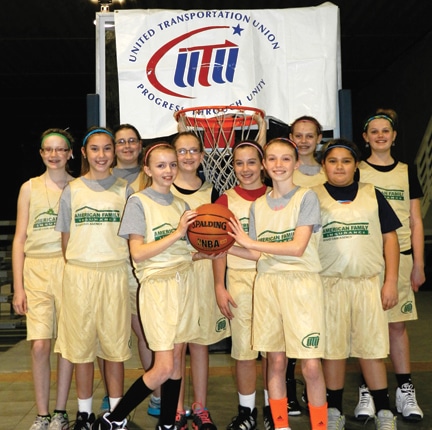 North Platte Locals 7, 200 and 286 annually sponsor a little league baseball team,
and a picture of their billboard at Legion Baseball Field has appeared in the UTU News.
When Vice Local Chairperson Kevin Winder asked Local 286 to sponsor his daughter’s
traveling basketball team, the local jumped at the chance, Legislative Rep. Steve Coleman reports.
Above is Local 286’s new favorite team, with Ashtyn Winder at far left.

Canadian National conductor James E. Stewart and engineer Steve Polanski were awarded Chippewa Falls Community Service Awards Dec. 4 by Mayor Greg Hoffman, according to a report in the Leader-Telegram, for “heroic actions in helping to save the life of a citizen in need.” The two were riding an eastbound train and saw what appeared to be someone on the ground waving a hat. They notified their dispatcher, who immediately called police. Shortly thereafter, police and EMT personnel found Don Shilts, 86, lying near the tracks. Shilts had suffered a stroke while raking leaves in his yard and fell down a hill near the tracks. He had been on the ground for more than four hours and his body temperature was down to 88 degrees. He then suffered a heart attack in the ambulance on the way to the hospital, but has recovered.

Conductor Chris Corbett, 29, was severely injured while working near Hudson, Colo., on the BNSF Brush Subdivision Jan. 1, and was airlifted to a Denver area hospital, Colorado State Legislative Director Carl Smith reports. Corbett suffered multiple fractions of his pelvis. “Chris and his wife are expecting a child in two months and they will have some obvious hardships. We are asking anyone that can to help our brother and his family during this difficult time,” Smith said. Contributions may be sent c/o Chris Corbett to UTU, 3222 Tejon St., Unit B., Denver, CO 80211-3471.

At this local’s Jan. 9 meeting, Cecil L. Pinner was sworn in as local secretary & treasurer following the retirement of former Secretary & Treasurer James Galbraith. Pinner ran unopposed in a special election and was elected by acclamation. In other news, Galbraith reports that retired former Local Chairperson Howard Knight, 73, died Dec. 28. He is survived by his wife, Carolyn.

The members of Amtrak Locals 262 and 1462 turned their annual holiday party in December into a fundraiser for conductor John Newman, who was paralyzed from the chest down in a November automobile accident. Following their lead, Local 1462 Treasurer Dave Bowe reports, Newman’s sister, Jeannie Nocera, opened a bank account in Newman’s name for anyone wishing to assist him financially. Contributions may be sent to Liberty Bank, Attn.: Cindi Whitehouse, John Newman Charitable Fund, 315 Main St., Middletown, CT 06457. “Rehabilitation has been slow, but Newman is improving,” Bowe said. 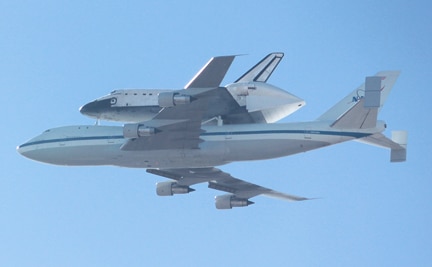 Local members in the drivers’ room at the San Francisco bus yard on Sept. 21, 2012,
were watching on television as the space shuttle Endeavour was flying piggyback
over the Golden Gate Bridge to its final destination at the California Science Center in Los Angeles when,
everyone in the bus yard started jumping and shouting, member Judith Hoff reports.
The space shuttle was flying directly overhead at about 1,500 feet.
Everyone ran out of the drivers’ room to see lead mechanic Alex Ageev take this picture.

UTU locals from Nebraska and surrounding states will be holding their third UTU Blanket Day at Fonner Park in Grand Island, Neb., April 12, beginning at 3 p.m., GO 953 Vice General Chairperson Rich Mohr reports. Last year, more than 75 UTU members representing different UTU locals attended the event. A blanket adorned with the SMART logo, sponsored by Local 1503 at Marysville, Kan., will be presented to the owner of the horse that wins the UTU/SMART race. Last year’s blanket sponsor was Local 367 at Omaha. Admission to the park is free. For more information and to confirm attendance, contact Local 7 Vice Local Chairperson Cliff Gordon by calling (308) 530-5766 or at cgordonutue@hotmail.com, or Local 286 member Ed Mueller by calling (308) 530-6711 or at meeko@kdsi.net. Reduced room rates are available at the Midtown Holiday Inn in Grand Island. Mention code “United Transportation Union” or “SMART” when making a reservation at (308) 384-1330.