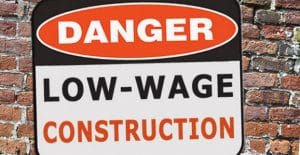 Across the country, Republican legislators are pushing legislation to repeal or drastically alter prevailing wage requirements for publicly funded construction projects. The effort is being coordinated by the all-powerful right-wing lobby ALEC (American Legislative Exchange Council) and its coalition of hard core right wing anti-union collaborators.

We Party Patriots reported on a recent piece from the Center for Media and Democracy some details about ALEC’s allies.  It found that some of the major ALEC backers behind this effort are the State Policy Network, the Associated Builders & Contractors (ABC), the National Federation of Independent Business (NFIB), the Michigan-based Mackinac Center for Public Policy, and the Wisconsin-based MacIver Institute for Public Policy.

CMD focuses on the coordinated efforts of these organizations to push anti-worker legislation in states that were former union strongholds.  Labeling the midwest as “ground zero for the assault on wages,” they notes that the GOP’s victories in recent elections have provided the opportunity for the right to push its agenda in the region.

PR Watch breaks down the relationships between the organizations and politicians and how they have affected new legislation.  To read more about ALEC, big business, and the return of the robber barons visit PRWatch.org.