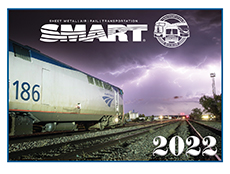 August 23, 2022 The SMART Transportation Division is seeking high-quality bus and rail photos for the annual Alumni Association calendar. If your photo is chosen, you will receive five copies of the calendar featuring your photo. All photos should be taken from a clear point of safety. Your high-resolution, horizontal photos should be submitted to news_td@smart-union.org by no […]

Your experiences – our PEB case!

July 22, 2022 Attention freight rail members in national handling: To further strengthen our PEB presentation, we are soliciting additional evidence regarding the restrictive and punitive measures carriers have used to punish employees who are attempting to look after their own health, and the actions taken by members to avoid such. Specifically, we are requesting that members provide […]

The TRUTH about the railroad supply chain and labor negotiations

July 8, 2022 SMART Transportation Division (SMART-TD) would like to take a few moments to update the thousands of essential rail workers whom we proudly represent, the rail shippers and customers, as well as the public at large on the real status of labor negotiations and about the serious factual misrepresentations that the Association of American Railroads (AAR) […]

June 16, 2022 Former Vice President Robert “Bob” W. Earley, who served our union’s membership for decades, died June 7, 2022, at Jones Memorial Hospital in Wellsville, N.Y., after a short illness. Brother Earley, a member of Local 610 (Baltimore, Md.), began his railroad career in 1963 starting with the B&O Railroad and became an active member of […]

May 6, 2022 William “Larry” Foster, a SMART Transportation Division Alumni Association member and retiree from Local 226 (Moberly, Mo.) who proudly served our union as Missouri’s state legislative director for the better part of two decades, passed away May 4 at his home. He was 80. Foster began as state legislative director in April 1992 and was […]

April 27, 2022 Effective April 25, 2022, the U.S. Railroad Retirement Board (RRB) is offering in-person appointments at its nationwide network of 53 field offices. Individuals can schedule appointments by calling the agency’s toll-free telephone number, (877) 772-5772, and speaking to a representative. If they experience a lengthy wait time on this call, they may be given the […]

Transportation labor reacts to the State of the Union Address

February 28, 2022 Attention SMART TD members! On Feb. 28, SMART is launching its new website. This site offers SMART TD and its members a greater level of security and utility compared with the older design. Important union information will now be secured behind a login and the news and resources that matter most to you as a […]