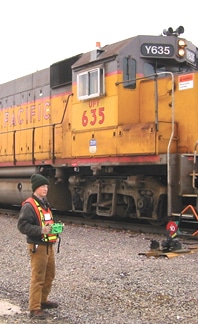 There is no civilian employment more dangerous than railroads. All too frequently, accidents result in fatalities and career-ending injuries.

The task force also coordinates with the Transportation Safety Team (which assists the National Transportation Safety Board (NTSB) in post-accident investigations) and the Switching Operations Fatality Analysis (SOFA) Working Group, which works with the FRA and carriers to develop safe practices to reduce switch-yard accidents, fatalities and injuries.

The Rail Safety Task Force is most interested in receiving comments from Transportation Division members working in yards and aboard trains. The contact information below permits members to communicate concerns and suggestions directly to the task force.