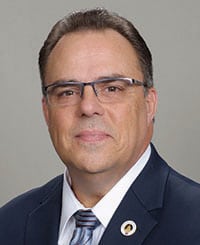 Transportation Division Vice President John England began his railroad career with the BNSF in 1978. He has worked as a trainman, engineer, and RCO Operator. He has spent the last 30-plus years as a full- and part-time union officer gaining insight into the Transportation Division and lobbying for better working conditions for our members. After 17 years as a Local Chairperson, John became a General Chairperson and earned the distinction of being the first General Chairperson of a combined committee encompassing bus and rail properties.  John also spent many years as a Local Legislative Representative, eventually rising to Alternate State Legislative Director of California. Brother England has also served as a Delegate to four United Transportation Union Conventions as well as attending three others and served as a Delegate to the last two AFL-CIO conventions where many unions come to work together.

For the past few years Brother England has had the opportunity to work with Designated Legal Council and the Academy of Rail Labor Attorneys, along with the Cooperating Rail Labor Organizations, where many of our health and welfare programs and pensions are decided.  John’s role as a Board Member of the United Transportation Union Insurance Association (UTUIA) and former role as General Secretary & Treasurer of the UTUIA have helped move the Association forward.  He has been involved in multiple real estate transactions with the UTUIA.

In addition, the SMART TD President has assigned Brother England to:

John has been married to his wife Percia for 41 years.  They have five adult children and four grandchildren as well as two fur babies.